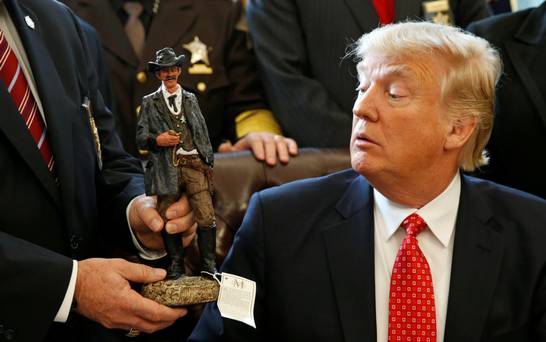 THE White House issued a warning to Iran last night that “there’s a new president in town” and it would not “sit by” and allow the country to pursue its military ambitions.

He dismissed the US decision to put Iran “on notice” over a recent ballistic missile test and called on Iranians to take part in demonstrations on Friday, when the anniversary of the 1979 Islamic revolution will be marked.

Mr Khamenei said: “We are thankful to [Mr Trump] for making our life easy as he showed the real face of America.

“He says, ‘You should be afraid of me’. No! The Iranian people will respond to his words on February 10 and will show their stance against such threats.”

Mr Trump responded to the January 29 missile test by saying Iran was “playing with fire” and imposed fresh sanctions on individuals, some of them linked to Iran’s elite Revolutionary Guard.

The missile test was not a direct breach of Iran’s 2015 nuclear pact with six world powers, but the White House said it “violated the spirit of that”.

“I think the Ayatollah is going to realise there’s a new president in office,” Mr Spicer said. “This president’s not going to sit by and let Iran flout its violations, or its apparent violations, to the joint agreement, but he will continue to take action as he sees fit.

“The president has also made clear time and time again that he’s not going to project what those actions will be, and he’s not going to take anything off the table. But I think Iran is kidding itself if they don’t realise there’s a new president in town.”

Mr Trump was also facing a legal showdown last night over his travel and refugee ban and vowed to take it all the way to the US Supreme Court if necessary.

He said: “We’re going to take it through the system. It’s very important for the country. Regardless of me or whoever succeeds at a later date.”

Mr Trump signed his executive order temporarily banning people from seven predominantly Muslim countries entering the US, and suspending the US refugee programme, on January 27.

Last night the US government was asking an appeal court to restore the executive order.

Meanwhile, Betsy DeVos was voted in as education secretary after Vice-President Mike Pence cast a rare, tie-breaking vote on the Senate floor. There were 51 votes in her favour and 50 against.

She was the only cabinet pick to come close to failure after Democrats successfully stalled and delayed her hearing.

The vote came after the Democrats staged a 24-hour protest in the Senate, asking for support from just one more Republican to break the vote in their favour.

In the days before her appointment, congressional switchboards were jammed as people phoned in to protest to their representatives. Two Republican senators, Susan Collins of Maine and Lisa Murkowski of Alaska, were against her appointment, but a third Republican dissenter was needed.

Mr Pence was filmed running up the steps to the Senate yesterday morning to cast his vote for Ms DeVos.

It was the first time in American history that a vice-president’s vote was required to break a tie for a cabinet pick.

Democratic Senator Chuck Schumer tweeted: “This cabinet nom is so unqualified, so divisive, that @MikePenceVP had to drive down Pennsylvania Ave to cast the deciding vote.”

Jeff Sessions, the incoming Attorney General, also voted in her favour. His confirmation vote was scheduled for just after Ms DeVos to ensure he could take part.

Filings from the Federal Election Commission show that her family previously donated to more than 20 Republicans who voted in her favour.

Ms DeVos tweeted after the vote that she “appreciated the Senate’s diligence” and was “honoured” to be appointed.

“Let’s improve options and outcomes for all US students,” she tweeted.