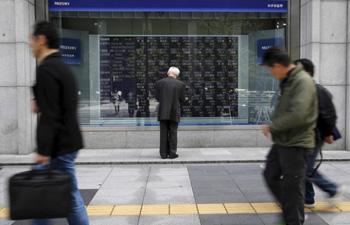 Asian shares climbed to their highest in more than 18 months on Thursday, as investors grew more confident about China while the dollar slightly firmed in the wake of growing concerns over political instability in Europe.

MSCI’s broadest index of Asia-Pacific shares outside Japan gained 0.4 percent to their highest since July 2015 with Hong Kong, Taiwan and China among the region’s best performing markets.

“In China we have an overweight view on equities as we see improved corporate earnings outlook with the Chinese PPI (producer price index) turning around from deflation trend,” said Fan Cheuk Wan, head of investment strategy for Asia at HSBC Private Bank.

It also has overweight recommendation on India and Indonesia.

An ongoing rally in commodity prices led by copper and iron ore, along with gentle policy tightening by Beijing via money market rates, has led to a more optimistic view of Chinese corporate earnings, analysts said.

Earnings growth for MSCI China is expected at nearly 15 percent over the next 12 months, slightly ahead of 13 percent projected for companies in MSCI Asia outside Japan, according to Thomson Reuters data.

Pictet Asset Management has cut its exposure to U.S. markets due to expensive valuations, and has turned bullish on emerging markets in Asia, citing strong correlations with commodity prices.

In other markets, New Zealand stocks rose after the central bank signaled that a further cut in interest rates was no longer likely while Japanese shares were in focus before a meeting between U.S. President Donald Trump and Japan’s Prime Minister Shinzo Abe on Friday.

Abe will propose a new cabinet level framework for U.S.-Japan talks on trade, security and macroeconomic issues, including currencies, a Japanese government official involved in planning the summit in Washington said.

“Trade and defense will be in focus,” said Norihiro Fujito, a senior investment strategist at Mitsubishi UFJ Morgan Stanley Securities. “We need to see if anything is said that has an effect on currencies, or on specific companies.”

In commodities, copper held onto gains after the world’s top two mines said strikes and permit delays would force them to cut output. Helping sentiment was a recent pick-up in China’s producer price index to its highest levels since September 2011. Copper prices are up 27 percent since late October.

Oil prices stabilized on Thursday, boosted by an unexpected draw in U.S. gasoline inventories. Brent crude futures was trading at $55.43 per barrel, up 0.5 percent.

However, bubbling political concerns, including a strong showing by far-right candidate Marine Le Pen in France’s presidential race, have pushed up premiums demanded by investors to buy French debt over comparable bonds and pushed the yen and U.S. Treasuries higher.

Uncertainty translated into another day of gains for bonds, with 10-year U.S. benchmark bond yields declining for a third consecutive day to 2.34 percent, the lowest level in three weeks and retracing one-third of its rise since Trump’s victory in early November.

The dollar bounced after the previous day’s drop, but falling yields are set to limit the greenback’s gains.

Against a broad trade-weighted basket of its rivals, the dollar was trading at 100.31 compared to a level of 99.30 last week. The Japanese yen also held its ground thanks to a broad rush to safety.