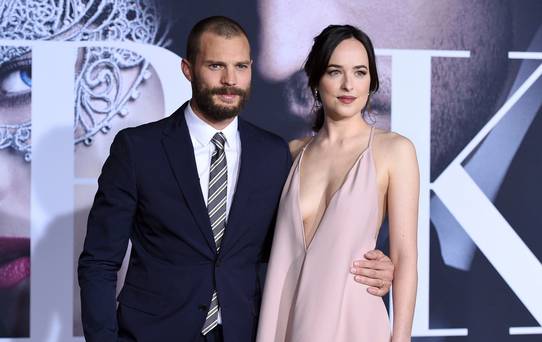 Despite their runaway success, the Fifty Shades of Grey novels by E.L. James have faced criticism from multiple angles: they’ve been accused of glamorising abusive relationships, of kink-shaming – that is, associating unusual sexual tastes with psychological damage – and of catering to regressive fantasies of wealth and power.

The sheer range of objections suggests that there could be something quite interesting going on in these books, and in the films derived from them. So there is, at least in James Foley’s new Fifty Shades Darker – a decided improvement over its predecessor, Sam Taylor-Johnson’s over-tasteful Fifty Shades of Grey.

A talented director returning to the big screen after a decade in TV, Foley (unlike Taylor-Johnson) never makes the mistake of condescending to his source material. Nor can he be blamed for the film’s biggest weakness, the miscasting of Jamie Dornan as billionaire sadist Christian Grey.

A friendlier edition of the young Colin Firth, Dornan hardly seems convincingly tortured, nor does he have the alpha-male swagger – the delight in his own power – which the part demands. But this matters less than might be imagined: the real star of the series is Dakota Johnson as Anastasia Steele, the outwardly demure publisher’s assistant who discovers her wilder side once she signs on as Christian’s “submissive”.

It’s essential to the conception that Anastasia is a bookish, reserved young lady (her straight brown hair, worn with a fringe, defines what you might call Mousy Chic). As a professional reader, she recognises Christian as the literary archetype he is – and consciously adopts the role of the virtuous heroine, drawn to him with delicious reluctance.

Wisely under the circumstances, Foley directs the sex scenes so the entire focus is on Anastasia’s pleasure and excitement. Her “submission” occurs very much on her own terms, almost as if Christian were a personal trainer guiding her through a demanding new exercise regime.

Foley maintains the “classy” look of the first film – sleek, shadowy compositions defined by strong verticals, as in the signature image of the lights of Seattle viewed from the floor-to-ceiling windows of Christian’s penthouse. But he injects a new kind of pulpy suspense, drawing on his background as a director of moody thrillers such as After Dark, My Sweet.

Where Anastasia once had Christian to herself, he’s now surrounded by women who have their own claims on him: there’s Marcia Gay Harden returning as his mother, Kim Basinger as his predatory first lover, and Bella Heathcote – the vampire bride from Tim Burton’s Dark Shadows – as a wraithlike figure who serves as a warning of what Ana could yet become.

As the middle instalment of a trilogy, Fifty Shades Darker ends with little resolved – but this can be seen as a strength, letting Foley and screenwriter Niall Leonard explore the ambiguities implicit in the story without giving easy answers.

What is the difference between dominance and sadism? Can a relationship be reduced to a game with clear-cut rules? And is it possible to submit in the bedroom while retaining autonomy elsewhere? For supposed trash, Fifty Shades Darker offers a fair amount to ponder.