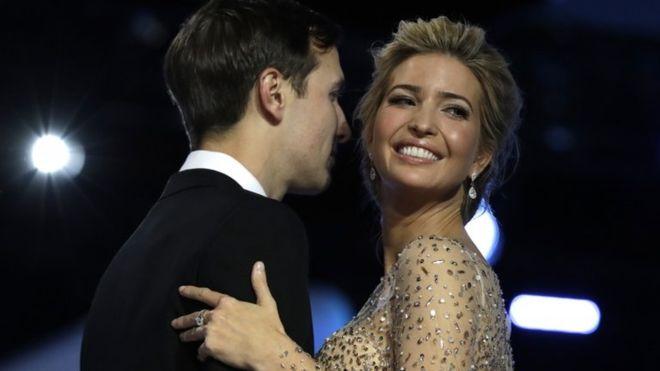 Democrats have condemned President Donald Trump’s tweet attacking a clothing retailer after it dropped a fashion line owned by his daughter.

Mr Trump tweeted that “Ivanka has been treated so unfairly” by clothing retailer Nordstrom.

A Democratic senator called the post “inappropriate” and an ex-White House ethics tsar dubbed it “outrageous”.

The move comes amid a boycott of all Trump products, which activists have dubbed #GrabYourWallet, in reference to a 2005 comment Mr Trump made about women’s bodies.

A spokesman for Pennsylvania Senator Bob Casey said the senator “feels it is unethical and inappropriate for the president to lash out at a private company for refusing to enrich his family”.

In 1950 President Harry Truman penned an angry letter to Washington Post music critic Paul Hume, who had panned a singing performance by the president’s daughter, Margaret. Sixty-six years later, another president has come to the defence of his offspring.

For Truman, the incident led to widespread ridicule. Donald Trump’s Twitter attack on Nordstrom may have graver consequences, however, calling into question the appropriateness of a president using his public megaphone not just to protect a daughter’s honour, but to advance the family’s business interests as well.

Mr Trump has slammed companies before, but that at least has been in the name of advancing US economic interests. This is different. This is personal.

Ethics experts have warned that Mr Trump’s assurances of a “firewall” between his presidency and his family’s financial concerns was insufficient. Now the president has provided a new, key piece of supporting evidence that could very well be cited in lawsuits trying to force Mr Trump to fully divest from his business empire.

The irony is that Mr Trump’s efforts may backfire. Would any retailer want a partnership with Ivanka Trump knowing they risk the ire of the president and his supporters if things go sour?

The White House has played down the row.

Press spokesman Sean Spicer said that Nordstrom’s decision was political, and the president was simply reacting to “an attack” on his daughter.

“This is a direct attack on his policies and her name and so there’s clearly an attempt for [the president] to stand up for her being maligned because they have a problem with his policies,” Mr Spicer said during the daily press briefing.

In announcing their decision six days ago, Nordstrom said the decision was based on the brand’s performance, which is what the firm repeated on Wednesday.

“Sales of the brand have steadily declined to the point where it didn’t make good business sense for us to continue with the line for now,” the company said in a statement, adding that Ivanka Trump was personally informed of the decision in early January.

Shares in the retailer fell 0.7%, before rallying slightly by midday.

Earlier this week, First Lady Melania Trump came under fire after she re-filed a lawsuit against the Daily Mail over false allegations that she once worked as an escort.

Her lawyers accused the news website of trying to deny her a “once-in-a-lifetime opportunity” to profit from her position as “one of the most photographed women in the world”.

Critics accused the First Lady of improperly seeking to profit financially from her White House position.