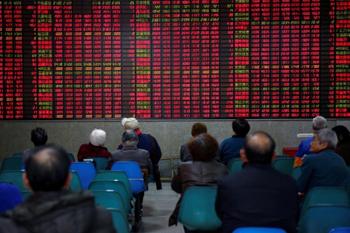 Asian shares rallied to an 18-month peak on Friday, as investors cheered upbeat Chinese trade data and strong gains on Wall Street after U.S. President Donald Trump promised to unveil a major tax announcement to lower the burden on businesses.

The mood was expected to carry over into European trading, with financial spreadbetters predicting opening gains for Britain’s FTSE, Germany’s DAX and France’s CAC.

China’s January exports rose 7.9 percent from a year earlier, while imports jumped 16.7 percent, beating expectations and getting the economy off to a strong start in 2017 even as Asia braces for a rise in U.S. protectionism under President Donald Trump.

On the political front, Trump seemed to change tack and said he would honor the longstanding “one China” policy during a phone call with China’s leader, a major diplomatic boost for Beijing which brooks no criticism of its claim to neighboring Taiwan.

China’s strong trade “is related to the global pick-up in growth in the U.S., Europe and also emerging economies,” said Jianguang Shen, chief economist at Mizuho Securities in Hong Kong.

Japan’s Nikkei stock index surged 2.5 percent thanks to the tailwind from a weaker currency, and added 2.4 percent for the week.

Wall Street’s three main indexes notched record highs on Thursday after Trump said he would make a major tax announcement in a few weeks, though he offered no details. [.N]

“Financial markets latched on to his comments yesterday about ‘something phenomenal on tax in the next two to three weeks’ like a thirsty man spying what looks like an oasis in the desert,” Michael Hewson, chief market analyst at CMC Markets, said in a note.

The dollar index, which tracks the greenback against a basket of six major currencies, added 0.1 percent on the day to 100.72, on track to gain 0.8 percent for the week.

The Australian dollar rode the trade data from China, Australia’s major export market. The Aussie rose 0.2 percent to $0.7641, also supported by an optimistic view from the country’s central bank, which suggested that further interest rate cuts were off the table.

The euro, under pressure from political concerns as the campaign for France’s presidential election heated up, was steady on the day at $1.0655. It was still down 1.2 percent for the week.

Against its Japanese counterpart, the dollar gained 0.4 percent to 113.75 yen, up more than 1 percent for the week ahead of a meeting later on Friday between Trump and Japan’s Prime Minister Shinzo Abe.

Abe will propose a new cabinet level framework for U.S.-Japan talks on trade, security and macroeconomic issues, including currencies, a Japanese government official involved in planning the summit said.