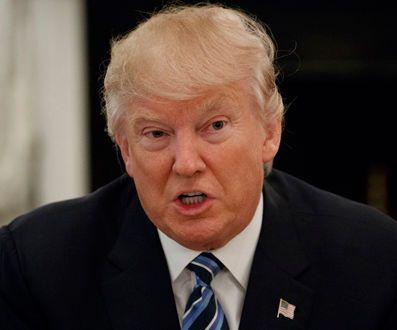 A defiant President Donald Trump tweeted “SEE YOU IN COURT” after a San Francisco federal appeals court Thursday upheld the suspension of his controversial immigration order.

He also warned the security of the nation was at stake and said he expected to easily win the case.

Top presidential adviser Kellyanne Conway told Martha MacCallum on “The First 100 Days” that she could not specify if Trump meant he would take it to the Supreme Court, but there were “different options” open to the White House.

She added that the ruling “does not affect the merits at all.”

The panel of three judges on the 9th U.S. Circuit Court of Appeals unanimously refused to reinstate the order after a federal judge had issued a halt to it last week.

But the Justice Department said it is “reviewing the decision and considering its options.” Trump later tweeted: “SEE YOU IN COURT, THE SECURITY OF OUR NATION IS AT STAKE!”

SEE YOU IN COURT, THE SECURITY OF OUR NATION IS AT STAKE!

He also told the White House press pool shortly after the ruling, “it’s a political decision and we’ll see them in court…it is a decision that we will win in my opinion very easily.

Asked how he learned about the decision, Trump replied, “we just saw it, just like you did.”

Trump issued the executive order, which placed a 90-day pause on immigrants from Iraq, Iran, Syria, Yemen, Libya, Somalia and Sudan, on Jan. 27, causing chaos and outrage at airports across the country. The order also imposed a 120-day pause on all refugees, and an indefinite pause on refugees from Syria.

The case was given to the appeals court after a Seattle federal judge last week ordered a halt to Trump’s order. Judge James Robart issued a temporary restraining order after Washington state and Minnesota both sued.

Attorneys from the Justice Department appealed Robart’s ruling, arguing that the president’s executive power gives him the authority to place restrictions on people coming into the country.

However, the court ruling disagreed with that argument:

“In short, although courts owe considerable deference to the President’s policy determinations with respect to immigration and national security, it is beyond question that the federal judiciary retains the authority to adjudicate constitutional challenges to executive action,” the court ruled.

Supporters of Trump’s order argue it will help keep America safe from terrorists looking to infiltrate the United States from terror hotspots that often have inadequate vetting procedures. Opponents have argued it is unconstitutional and discriminatory – claiming that it is a “Muslim ban” and that it has harmed individuals and businesses.

The court ruled that the government has not presented “any evidence” of a sufficient national security threat from the seven countries in question.

“…[The] Government has not offered any evidence or even an explanation of how the national security concerns that justified those designations, which triggered visa requirements, can be extrapolated to justify an urgent need for the Executive Order to be immediately reinstated.

The Democratic National Committee called the ruling a “massive blow to the White House.

“Let’s be clear: This is a massive blow to the White House. The court upheld that we do not discriminate based on religion. That is what terrorists do, and what terrorists want us to do,” Interim DNC Chair Donna Brazile said in a statement.

“The government’s erratic and chaotic attempts to enforce this unconstitutional ban have taken a tremendous toll on innocent individuals, our country’s values, and our standing in the world,” Omar Jadwat, director of the ACLU’s Immigrants’ Rights Projects, said in a statement. “We will keep fighting this un-American executive order until it is permanently dismantled.”

“President Trump ought to see the handwriting on the wall that his executive order is unconstitutional. He should abandon this proposal, roll up his sleeves and come up with a real, bipartisan plan to keep us safe,” he said.

If the case goes to the Supreme Court, it appears Trump’s nominee for its vacant seat, Judge Neil Gorsuch, is unlikely to be in place by the time it reached the court. It is also possible that if it goes to the high court, by that time the temporary restrictions would have expired.

The administration could also ask a larger panel of judges to hear the appeal, or accept the order and go back to the Seattle-based federal court and try and block the next legal step — whether to grant the states’ request for a preliminary injunction—which would put enforcement of the Executive Order on hold until all the appeals are exhausted.

“There are statements that we’ve quoted in our complaint that are rather shocking evidence of intent to discriminate against Muslims, given that we haven’t even had any discovery yet to find out what else might have been said in private,” Purcell said.

Trump had been outspoken in his criticism of the case, calling Robart a “so-called judge” on Twitter, and on Wednesday warning that “if the U.S. does not win this case as it so obviously should, we can never have the security and safety to which we are entitled.”