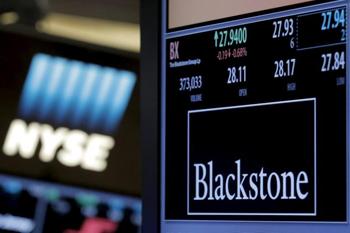 The deal gives Blackstone ownership of a business that processes work benefits for 15 percent of the U.S. population.

It also allows Aon to exit a mature, capital-intensive outsourcing business, allowing it to invest in growth areas beyond its core insurance brokerage operations, such as cyber security and health insurance.

Blackstone prevailed over buyout firm Clayton Dubilier & Rice LLC (CD&R) in an auction for the benefits administration and human resources business process outsourcing platform of Aon, providing assurances it can successfully carve out the unit, the people said. The deal will be announced by Friday, the people added.

The sources asked not to be identified because the negotiations are confidential. Aon and CD&R declined to comment, while Blackstone could not immediately be reached for comment.

Headquartered in London, Aon is an insurance brokerage active in more than 120 countries.

Aon took on the benefits outsourcing unit it has agreed to sell to Blackstone as part of its acquisition in 2010 of Hewitt Associates Inc for $4.9 billion.

“The potential divestiture of the outsourcing business moves Aon away from the most mature and lower growth area of the business. Selling the benefits administration business would therefore be consistent with the actions to improve the business mix,” William Blair analysts wrote in a note on Jan. 23, after Reuters reported that Aon was in talks to sell the unit.

Private equity firms have been prolific investors in businesses that help companies cut costs by outsourcing large parts of their administrative functions, since such operations can generate strong cash flows. A few years after they invest, they seek to sell ownership of those assets at a big profit.

(Reporting by Greg Roumeliotis and Lauren Hirsch in New York)