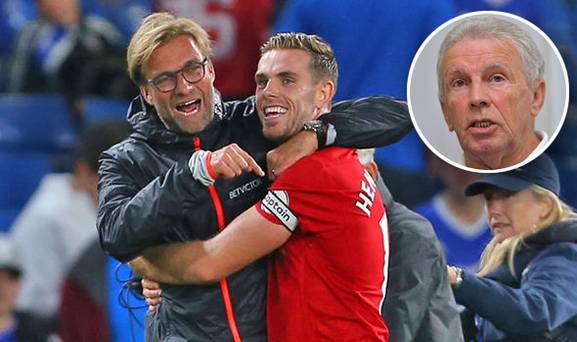 Ireland legend John Giles gave a withering appraisal of Liverpool’s slump that has seen go from fighting on three fronts to staring down the barrel of another trophyless season over the past six weeks.

Klopp’s side have yet to win a Premier League match in 2017 and have collected just three points from five matches, which has seen them drop out of the top four for the first time since September.

January was a terrible month for Liverpool‘s ambitions as they exited two cup competitions and slipped from title contenders at the start to clinging on to Champions League hopes at the end.

Speaking on Off The Ball on Newstalk this evening, Giles claimed that Klopp’s high pressing style and the side’s weakness in defence have contributed to their woes.

“They don’t defend well and you have to defend sometime.”

He was particularly critical of the holding midfield partnership of Jordan Henderson and Emre Can.

“Henderson is not going to create anything. He’s one of the most non-creative players I’ve ever seen playing in midfield and they have Can who doesn’t have a creative bone in his body either,” he added.

“He’s a good athlete but I don’t think Henderson is a player at all, every ball he gets is back and sideways.

“You’re not going to break anyone down. If the opposition have the ball, Can can win it, Henderson can win it sometimes and pass to other people but once the opposition give them the ball and say ‘break us down’, I don’t think they have the ability to do it.

“The biggest problem is that when they do lose it, they can’t defend.

“If you look at the Wolves match for example, they were on the edge of the Wolves box when Wolves won the ball and two passes later the ball in the back of the net.

“I think Klopp believes ‘we’ll throw everything at them’.

“When they’re attacking, their two full-backs are at the edge of the box. Now I always believed if you are attacking one side, the other full-back has to cover.

“Coutinho can do a bit on his own, I don’t think Lallana beats players and none of the others do.

“When you have that, you’ve no creative force in the middle of the field and dodgy at the back, you will have inconsistency.

“There is no emphasis on defence.”

Giles concedes that Liverpool’s cause was not helped in 2017 given their tough fixture schedule.

“They have played a lot of games and they don’t have a big squad.

“Their game is based on physical attributes more than anyone other team.