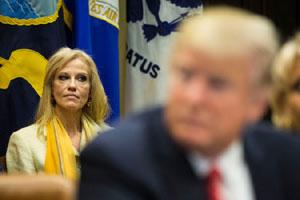 By THE EDITORIAL BOARD – The New York Times

“Go buy Ivanka’s stuff, is what I would tell you,” Ms. Conway said in an interview on “Fox & Friends.” “I’m going to give a free commercial here: Go buy it today, everybody. You can find it online.”

That’s cartoonishly crass, but perhaps not surprising, considering the example set by the president himself. On Wednesday he turned the power of his office against Nordstrom, attacking it for dropping Ivanka’s clothing line.

Ms. Conway’s remarks, made from the White House briefing room, plainly violated federal ethics regulations, which state that an employee “shall not use his public office for his own private gain, for the endorsement of any product, service or enterprise or for the private gain of friends, relatives, or persons with whom the employee is affiliated in a nongovernmental capacity.”

“Using public office for private gain” could be the motto of this administration, which is largely disregarding laws and customs meant to assure that presidents won’t let their financial interests get in the way of leading the nation. (This president, of course, has at least one immediate issue of his own: the violation of his 60-year lease of the government-owned Old Post Office building in Washington, which bars any elected official from being the lessee.)

Ethics experts and good-government groups were quick to pounce on Ms. Conway’s impromptu infomercial, and her ethical violation was so glaring that even some Republicans in Congress took note. Her words were “wrong, wrong, wrong, clearly over the line, unacceptable,” said Jason Chaffetz, the chairman of the House Oversight and Government Reform Committee. Mr. Chaffetz called for the White House to refer the matter to the Office of Government Ethics, which could recommend disciplinary actions against Ms. Conway, including suspension and loss of pay. A referral would be the right way to deal with this. (The White House said that she has been “counseled,” which sounds like something between a wink and a slap on the wrist.)

Whatever happens to Ms. Conway, the deeper concern here is over the administration’s insistence on treating the White House as a wholly -owned subsidiary of the Trump Organization. If Mr. Trump truly cares more about his new job serving the American people than about serving the family empire, he knows what to do: release his tax returns and sell his businesses.