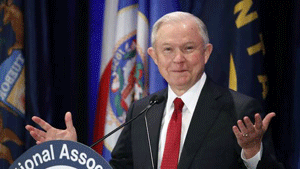 For months, Attorney General Jeff Sessions has endured a public thrashing … over nothing.

He broke no laws, breached no ethical rules, and “colluded” with no one.  Nonetheless, he was maligned and vilified by those who sought to impugn his honesty and integrity for what now seems, in retrospect, to be nothing more than partisan politics.

Tuesday, it was his turn.  Sessions vigorously defended himself at a public hearing and refuted accusations that he had lied before Congress.  He acquitted himself nicely.

Sen. Mark Warner, D-Va., set the ugly tone for Democrats on the Senate Intelligence Committee when he began by misrepresenting Sessions’ testimony at his confirmation hearing in January, selectively reading only part of Sessions’ testimony and deliberately omitting the full question and full answer.  It was a shameful cheap shot by Warner, driven either by malice or ignorance.  Maybe both.

But Attorney General Jeff Sessions would have none of it.  In his own determined but reserved way, Sessions expressed his contempt for what he called “scurrilous” accusations against him.  Too bad the camera was not focused on Warner’s face.  There might have been egg all over it.

It was Sessions’ confirmation testimony, clearly misconstrued, which formed the basis for the persistent canard that he deceived Congress and committed perjury.  It was a ludicrous claim when it was first made months ago.  But that did not stop partisans from perpetuating it and the media from running wild with it.

Of course he had prior meetings with foreign officials. That was his job as a U.S. Senator on the Armed Service Committee. Never mind that numerous Democratic Senators had similar meetings.

So Tuesday, Sessions disabused the accusation at the outset.  He recited the full context of the question in which he had been asked about an “exchange of information during the campaign between Trump’s surrogates and intermediaries for the Russian government.”  And then he provided his original answer:

“I have been called a surrogate at a time or two in that campaign … and I did not have communications with the Russians.”

His simple and indisputable answer seemed to take the air out of his antagonists’ smear campaign.  At least on that issue.

Sessions spelled out what he had already explained many times before.  That is, he never met as a campaign surrogate with any Russian official.   “That was the context,” he said, “and in that context my answer was a fair and correct response to the charge as I understood it.   It did not occur to me to go further to other conversations or meetings.”

Of course he had prior meetings with foreign officials.  That was his job as a U.S. Senator on the Armed Service Committee.  Never mind that numerous Democratic Senators had similar meetings.

As for “collusion” with the Russians?  Sessions became visibly angry when he declared, “I have never met with or had a conversation with Russians regarding interference with the election.  The suggesting that I participated in collusion to hurt this country, which I have served with honor for 35 years, is an appalling and detestable lie.”

The Firing Of Comey

Sessions was understandably and prudently cautious when asked about President Trump’s decision to fire FBI Director James Comey.  To do otherwise would breach the right of the president to receive advice in confidential communications with his Attorney General.

Citing the well-established privilege endorsed by the Supreme Court, Sessions declined to reveal his presidential conversations.  Sen. Ron Wyden, D-Oregon, seemed outraged, if not unschooled, on the principles of “executive privilege.”

Sessions patiently explained that only the president has the right to invoke “executive privilege.”  He cannot do so until he has had a chance to review the specific conversations sought by the committee.  This is always the case.  The same standard was practiced in both the Obama and Bush presidencies.

If a witness, like Sessions, declines to answer a question, the committee may then take steps to compel a response.  At that point, having reviewed the matter, the president may or may not invoke “executive privilege.”  This is the procedure which has been followed ever since the Supreme Court formally recognized the privilege in the 1970’s.  Yet, Wyden seemed clueless.

All Sessions could and would say is that he agreed with the memorandum authored by Deputy Attorney General Rod Rosenstein, saying that Comey had mishandled the Hillary Clinton email case which formed the basis for the firing of the Director.  Comey, said Sessions, had usurped the powers of the Justice Department.

Sessions did fire a broadside at Comey when he all but called him dishonest.  The A-G denied Comey’s account of a conversation in which the fired Director testified Sessions was silent when Comey expressed concern about meeting alone with President Trump.

Sessions said, “He (Comey) doesn’t remember this, but I responded to his comment by agreeing that the FBI and DOJ needed to be careful to follow department policy.”  Which is a southern gentleman’s way of calling Comey a liar.  He may well be.

The Attorney General reminded Senators that it was Comey who floated the suggestion that Sessions had committed some unidentified wrongdoing, “This is a secret innuendo being leaked out there about me, and I don’t appreciate it.”  Perhaps Comey, the leaker, was watching.

In a reference to Comey’s claim that the president attempted to derail the FBI’s investigation into Michael Flynn or Russian collaboration with the Trump campaign, Sessions offered a strong defense from his own experience when he offered, “The President never asked me to do anything unethical or illegal.”

In his own quiet but deliberate manner, Sessions expressed disdain for the way he has been treated.  And he well knows who is responsible.

Politicians and the media, animated by their unabashed scorn and visceral enmity toward Trump, deliberately twisted and distorted Sessions’ words to smear him.

Three decades ago a cabinet officer tarnished by false accusations asked, “Which office do I go to … to get my good reputation back?”

Sadly, there is no such office.