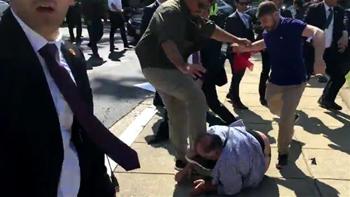 Turkish book agent Barbaros Altug’s reality is starting to resemble some of his most popular fiction, unfortunately for him.

Like the family in a client’s newest best-seller, Altug has joined the real-life exodus of Turks leaving their homeland amid President Recep Tayyip Erdogan’s purge of enemies and dissenters. After stints in Paris and Berlin following last year’s failed coup, the 43-year-old bachelor is settling in Stockholm.

“Heartbreak” is how the literary aficionado described his decision to leave this former imperial capital, whose history, architecture and intrigue have inspired artists for nearly three millennia. “I grew up hoping this country could come close to my dreams — a modern, free democracy,” he said during a recent trip home. “Now I’m not sure it will ever happen in my lifetime.”

As Erdogan strengthens his hold on a country at the crossroads of Europe and Asia, ruling by decree and firing or jailing civil servants by the tens of thousands, the professional class is heading west in droves. The number of educated, white-collar workers relocating abroad has quadrupled to almost 10,000 a month, data compiled by the CHP opposition party show. That includes an estimated 6,000 millionaires just in 2016, a sixfold annual jump, according to Johannesburg, South Africa-based research group New World Wealth.

Since 2013, when Erdogan deployed his security services to quash nationwide protests, he’s systematically eroded rights relating to speech and assembly, culminating in a disputed referendum in April that eliminated multiple checks and balances on his rule. Dozens of politicians and some 150 journalists — the most in the world — have been incarcerated and more people face jail time almost daily for social media posts that are deemed insulting to the leader.

The crackdown has been a disaster for property owners and agents in tony European districts of Istanbul like Beyoglu. Mustafa Aykac, 60, who’s been brokering leases and purchases in the picturesque Cihangir neighborhood for four decades, said he’s struggling to survive what he called the end of an era.

“Almost everything is up for sale or rent,” he said. “The old days are gone.”

At the same time, expats who help their fellow Turks emigrate to magnets for the diaspora such as southern Florida say business has never been better. Zeynel Biter, the founder of Epic Group, a consultancy based in Miami, said he’s getting triple the usual number of calls from Turks seeking investment visas.

The government doesn’t have data on the recent outflow of workers and officials at various agencies didn’t immediately respond to requests for comment. But voter rolls show the most popular destinations — two-thirds of the 3 million expatriates registered to vote live in Germany, France and Holland, followed by Belgium, Austria, Northern Cyprus, the U.S., Switzerland and Britain.

CS Global Partners, a London-based company that bills itself as “leaders in citizenship by investment,” said requests from Turkish clients for help getting a foreign passport have risen by about 25 percent every month since January.

“They feel they can no longer live a tranquil life in their home country,” Micha-Rose Emmett, CS Global Partners’ chief executive officer, said in an email. “One of the recurring questions we get is the host country’s history of adherence to the law and respect for basic freedoms.”

But it’s not just about liberty. A couple in their early 30s, Erdem and Mervegul Kazakli, said they left their engineering and banking jobs, respectively, to move to the Netherlands about 18 months ago for other reasons, too. They cited runaway corruption, the deteriorating quality of education and an endless string of terrorist attacks — 28 by their own count just since they relocated.

“We left because we lost hope,” Mervegul Kazakli, a new mother, said by phone from Amsterdam. “We were waiting to see if the environment would get better for our kid to grow up in and reached the conclusion that it won’t.”

Others looking to escape say they have no choice. A 28-year-old researcher whose company was shuttered by decree after the failed putsch said she received no severance pay and is now basically unemployable. She declined to give her name, citing the risks of going public with criticism of the authorities.

“A few places were honest enough to admit they’d like to hire me but can’t due to my previous workplace,” she said. “I hold a BA and MA from one of the best universities and I have over three years of work experience, but I haven’t received a single job offer despite submitting tons of applications.”

Erdogan has been merciless in pursuing people identified by officials as being sympathetic to Fethullah Gulen, the reclusive U.S.-based cleric he blames for the coup attempt, which resulted in the deaths of more than 240 people. In addition to the jailings and firings, the state has revoked tens of thousands of passports, preventing their holders from leaving the country.

If Gulenists are released from prison, “my people will punish them” in the streets, the Turkish leader said last week. “They will spit in their faces.”

Some businessmen with incentives to stay behind are starting to bemoan the brain drain in public. Nevzat Aydin, whose $589 million sale of the Yemeksepeti.com delivery service he still runs to Germany’s Delivery Hero Holding GmbH is studied at Harvard Business School, vented via Twitter.

“For the eighth time in the past year, I’m having to send off a very good employee abroad,” Aydin tweeted. “This is a shame for me, for my company and my country.” Erhan Erkut, a professor at Ozyegin University, responded: “The worst part is that those leaving are among the best.”

Firat Isbecer, the regional director in Istanbul for U.K.-based financial-services provider Monitise Plc, which bought his start-up, said his former employees and others he knows of have left the country to work at companies including Amazon.com Inc., Facebook Inc., Spotify Ltd., TripAdvisor Inc. and Booking.com, which is banned in Turkey.

“In the past year, 70 to 80 percent of our employees who quit went abroad,” mostly to Berlin, Amsterdam, London, California and Stockholm, Isbecer said. “This brain drain can be a good thing for Turkey, but only if these individuals come back with experience working at great multinational companies.”

Hurriyet, one of the newspapers that hasn’t been shut down or taken over by the state, asked the novelist Ayse Kulin, an Altug client whose most recent hit is titled, “Birds With Broken Wings,” whether it’s time to abandon Turkey.

“Stay and resist!” she said. “You don’t have another country.”

Still, Kulin, 76, said via WhatsApp that she empathizes with those who opt to leave — just like the matriarch in her latest book, which chronicles four generations of a Jewish family that flees Europe for the safety of cosmopolitan Istanbul. The story ends as the post-putsch crackdown begins and the old woman realizes that the family must leave to protect the grandchildren.

But that’s just the author doing what authors do — exploring inner lives.

“I want to stay in my homeland with the rest of the people who cannot leave for various reasons,” Kulin said. “I want to keep striving for a better life, for freedom and justice. I believe in better days ahead.”