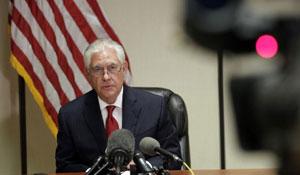 All of America’s allies and partners have been calling on Washington to improve its relations with Russia, Secretary of State Rex Tillerson acknowledged after the US Senate reached a bipartisan deal to boost sanctions against Moscow.

“I have yet to have a bilateral, one-on-one, a poolside conversation with a single counterpart in any country: in Europe, Middle East, even South-East Asia, that has not said to me: please, address your relationship with Russia, it has to be improved,” Tillerson said on Tuesday during testimony before the Senate Appropriations Committee on Foreign Operations.

Tillerson added that the countries urging the US to review its Russian policy “believe worsening this relationship will ultimately worsen theirsituation.”

He added: “People have been imploring me to engage and try to improve the situation, so, that was our approach anyway.”

Earlier, Tillerson warned that the US Senate’s bipartisan deal on new set of restrictive measures against Moscow might further worsen relations with Russia and hinder existing efforts on joint US-Russia progress to fight terrorism in Syria.

“There are efforts under way in Syria specifically, those are, I would say, progressing in a positive way,” America’s top diplomat said on Tuesday during testimony to the Senate Foreign Relations Committee.

Despite the relationship between US and Russia being “at an all-time low,” according to Tillerson, the “objective is to stabilize that” rather than deteriorate it further.

Washington is “engaged” and working with Moscow “in a couple of areas,” including on such issues of international importance as the Ukrainian and Syrian crises.

“We have some channels that are open, where we are starting to talk, and I think what I wouldn’t want to do is close the channels off,” Tillerson told the Senate committee, warning that to establish “something new… will take time.”

Joint efforts in fighting the Islamic State (IS, formerly ISIS/ISIL) terrorist group in the Middle East have topped the agenda during Tillerson’s visit to Moscow this year. Tillerson’s counterpart, Russia’s Foreign Minister Sergey Lavrov, also discussed the issue with President Trump during their White House meeting.

Meanwhile, the US and Russian military have been maintaining multiple communication channels to “deconflict” operations in Syria, according to Pentagon officials.

Confronted by Senator Robert Menendez (D-New Jersey), who has been a harsh critic of Moscow, about “Russia sanctions that have been agreed to in a bipartisan fashion,” Tillerson said that he would prefer to have “flexibility” in relations with the Kremlin. He had already had discussions on the topic with members of the Senate “who have called to inquire,” he added.

US senators, both Republicans and Democrats among them, agreed on new restrictive measures against Russia on Tuesday. Citing alleged Russia’s “interference” in the 2016 presidential election in the US, as well as the situations in Crimea and in Syria, the senators say they want new sanctions imposed on Moscow. The vote is reportedly set to take place Thursday.