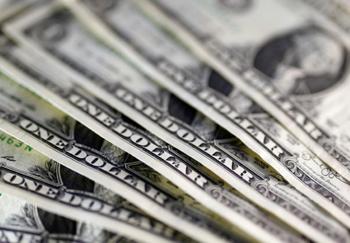 The dollar nursed losses on Thursday, after weak U.S. inflation data left investors wondering if the Federal Reserve would be able to follow up its latest rate hike with another later this year.

Deepening political turmoil in Washington also weighed on the greenback and U.S. Treasury yields, with the Washington Post reporting that U.S. President Donald Trump is being investigated by special counsel Robert Mueller for possible obstruction of justice.

Also on Wednesday, a prominent Republican was among those shot by a gunman said to be angry with Trump.

The dollar index, which tracks the U.S. currency against a basket of six rivals, was slightly lower on the day at 96.915 though above its overnight low of 96.323 plumbed after downbeat economic figures.

The Fed raised interest rates a quarter percentage point to a target range of 1.00 percent to 1.25 percent on Wednesday, as expected, and gave its first clear outline on its plan to reduce its $4.2-trillion bond portfolio.

But the moves were overshadowed by inflation and retail sales data earlier in the day that fell short of market expectations. The core rate of inflation increased at just 1.7 percent on year, the fourth straight monthly deceleration and the slowest overall pace in two years.

The Fed said a recent softening in inflation was seen as transitory, but the latest tepid price readings made investors question its view that the U.S. economy is continuing to improve.

Against its Japanese counterpart, the dollar shrugged off earlier losses and was flat at 109.54 yen, above Wednesday’s eight-week low of 108.81 yen.

The Fed also mapped out a very gradual approach to shrink its $4.2-trillion holdings of Treasury- and mortgage-backed assets that would allow it to begin as early as September. The process could start “relatively soon,” Fed Chair Janet Yellen said.

“There is a lot to digest, and even some apparently conflicting signals, such as the fact that the Fed revised its own inflation outlook slightly down and yet kept its intention to raise rates again this year,” said Mitsuo Imaizumi, Tokyo-based chief foreign exchange strategist for Daiwa Securities.

The Fed said it expects U.S. inflation to be at 1.7 percent by the end of this year, down from the 1.9 percent previously forecast.

“It remains to be seen if the Fed can really do both this year – raise rates again, and also begin reducing its balance sheet,” Imaizumi added.

A Reuters poll of 21 of the 23 primary dealers that do business directly with the Fed showed 14 of them now believed it would announce the start of its balance sheet normalisation at its Sept. 19-20 policy meeting. The rest of them said it would make such a move at its Dec. 12-13 meeting.

They said they expected Fed policymakers to raise interest rates one more time by the end of 2017 and then three times in 2018.

“Investors believe that it is going to take the Fed some time to confirm that inflation is strong enough to raise rates again, and in the meantime, the Fed is going to start reducing its balance sheet at a gradual pace,” said Kumiko Ishikawa, FX market analyst at Sony Financial Holdings in Tokyo.

“In this climate, there are no incentives to buy the dollar,” she said.

On Friday, the Bank of Japan is widely expected to keep its monetary policy unchanged, and reassure markets it will lag the Fed in tapering its massive stimulus programme, as Japan’s inflation remains low despite a strengthening economy.

BOJ Governor Haruhiko Kuroda is also seen dispelling market speculation that the central bank is engaging in “stealth tapering” by stressing that the recent slowdown in its Japanese government bond buying is simply the result of a stable bond market, according to sources familiar with the BOJ’s thinking.

Data showed that New Zealand’s economy grew 0.5 percent in the three months to March, lower than the 0.7 percent growth forecast in a Reuters poll and well below the central bank’s forecast for 0.9 percent growth.