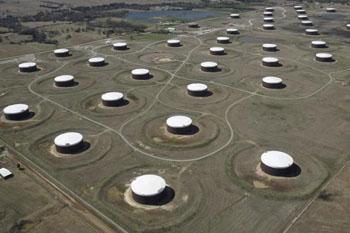 In its recent 2018 budget, the Trump Administration included a huge energy announcement.

While it went mostly under the radar, the budget included a proposal to sell half of the U.S. Strategic Petroleum Reserve (SPR) for some extra revenue.

Now, the SPR was originally established by Congress in 1975 after the 1973-74 Arab Oil Embargo wreaked havoc on America’s fuel supply.

It was designed to hold up to 729 million barrels of crude oil, and as of mid-May the SPR’s underground locations in Texas and Louisiana held about 688 million barrels.

Selling 350 million or so of those barrels, as proposed, would save some $16.6 billion…

But there’s a downside to it, too.

A few years ago, I was called on to make an external value assessment of the storage volume contained in the SPR.

In that report, I identified another crucial advantage to the SPR system.

An advantage that the proposed sell-off is putting at risk…

And that the U.S. oil industry – long supporters of the Trump Administration – is now clamoring to keep.

Here’s what you need to know…

My report on the SPR from a few years ago also led to a specific recommendation on how to use it – let me come back to that in a bit.

But first, let’s talk about the original, more “strategic” considerations regarding the SPR – and what Congress had in mind when it created the SPR back in 1975.

Back then, it was regarded only as a protection from future embargos by global producers. But if that’s still the case, it has outlived its purpose.

Nobody these days will refuse to sell crude to the U.S., even if serious political differences emerge.

Venezuela under the late Hugo Chavez is a good case in point. Despite holding America responsible for everything wrong with both the western hemisphere and the world, Venezuelan state oil company PDVSA remained adamant about protecting its access to the U.S. market.

Noe, when it comes to OPEC, some members may still desire to exercise leverage over U.S. domestic end users.

Shale Oil Means America No Longer Depends Much on Imports

When the ’73-’74 embargo took effect, OPEC’s main Arab members cut oil exports to the U.S. as a political reprisal for Washington’s decision to rearm Israel after the beginning of the 1973 Arab-Israeli conflict (the “Yom Kippur” war).

Back then, the U.S. was becoming increasingly dependent on oil imports, with the percentage of daily use coming in from abroad increasing to over 70 percent in the next decade and half.

However, today matters are quite different.

First off, the rise of shale oil has decisively changed the U.S. dependence upon imports.

When the opening of additional pipeline capacity for expanded crude oil flow from Canadian fields is considered, the prospects of both U.S. and North American self-sufficiency in the near term are quite strong.

In short, the only bargaining position left for imports is using price differentials to improve profit margins at domestic refineries – the primary end users of crude flows from whatever source.

The other thing that’s different today is this: while drawdowns from the SPR had been allowed in the past, they were confined to two ad hoc categories.

Lithium is the hottest commodity on the planet right now and most investors are making a huge mistake. Our latest analysis reveals all in a special free report for investors

One involved the emergence of regional short falls in fuel, most recently heating fuel for the Northeast market. The other resulted from more political threats of selling reserves to reduce high crude prices.

Of course, that was when oil prices were north of $100 a barrel. There is little impetus for such a move today when those same prices are below $50.

Then too, such sales would be once-off reactions.

As I discussed here in Oil & Energy Investor when the trial balloons were being floated on such sales, the government putting its thumb down on one side of the scales would simply set the new expectation for futures traders, a new floor for prices if you will, that could not be sustained.

Traders would simply discount the aberrant pricing level unless the government gave indication the sales would be ongoing.

However, there are now two primary arguments against the Trump proposal, both coming from a group that has been in strong support of the Administration…

I’m talking, of course, about the oil producing sector.

Selling half of the SPR holdings, even if the sales occur over a period of time, will result in guaranteed additional supply coming into the market.

That will push domestic price levels down.

With American producers already facing low prices, they would hardly applaud another attack on their revenues, this time arising from a decision by the government.

An SPR sale would immediately put another wave of struggling companies in the path of another liquidity crisis, bankruptcy, and merger and acquisition (M&A) activity.

But there is another opposition to the sale of SPR holdings growing, one that harkens back to my SPR report from a few years ago.

At the time, I determined that the existence of the SPR system provided another advantage to domestic producers…

The SPR Has a Hidden Benefit for U.S. Oil Companies

When selling oil to the SPR, American oil companies not only receive the best market price, but that oil is then removed from the market and does not constitute excess supply that pushes prices down.

In other words, they enhanced their profits by selling crude oil having high concentrations of impurities and/or sulfur.

I calculated at the time that as much as 25 percent of the volume comprising SPR reserves could not be used to refine higher-end oil products (jet fuel, high-octane gasoline, even low sulfur-content heating fuel) at costs refineries could justify.

Some of this is so bad it could not be refined beyond basic fuel oil at all.

Both of these public sector-inspired subsidies to the oil sector will be lost as SPR capacity is reduced or closed altogether.

On the other hand, I made a recommendation following my report that seems more appropriate now (in a lower price setting) than it was then in a triple-digit per barrel environment.

I suggested we use the SPR as a hedging tool to provide a balance between cost and price, thereby allowing a floor for producers and a ceiling for end users of the finished product.

This would also have the advantage of reducing the impact price manipulators have been having on prices.

You could even say this approach would create an energy predictability tool to undergird any national infrastructure development – “making America balanced again.”