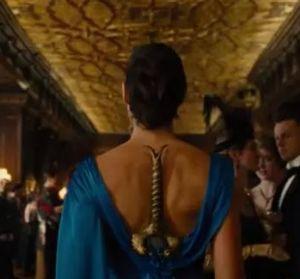 Thanks to one of this year’s pivotal movies, Wonder Woman, a new double-edged fashion movement is trending. With rave reviews and a new poster woman of strength in actor Gal Gadot, the movie has sparked movements from Wonder Woman-themed parties (Oprah, where was our invite?), New York’s Fearless Girl statue gaining a Wonder-ful head accessory, and even the film’s director Patty Jenkins sharing a post about how children are embracing the power of the feminist superhero.

The trend is inspired by one of the movie’s most riveting scenes in which Wonder Woman walks into a party with a sword tucked into the back of her red carpet-worthy ball gown.

After watching the scene, many were left wondering how the heck it was possible to carry a sword and walk so elegantly without injury? In response, social media has spawned a new trending movement, with women re-creating the weaponary-meets-evening wear party trick and sharing pictures using the hashtag, #WWgotyourback.

The hashtag  promotes Wonder Woman’s messages of unity and strength. The hashtag also pushes a double-edged meaning, of a women’s back literally being guarded by weaponry, and the notion that women are there to support each other, even in trying times.

The most badass photo shoot I’ve ever been a part of. Photo by @CatieOsaurus #WWgotyourback pic.twitter.com/eLR9FsFgwn

#wonderwoman showing us how to be a pretty princess and a force to be reckoned with. #WWgotyourback challenge: accepted!

The best part? Those getting involved are getting creative with their “weapons” of choice, because in 2017 safety comes first. Women using toy swords, lightsabers and even a pool noodle to join in the movement..

Mothers have also taken photos together with their daughters and another woman even took time out of her wedding to pay homage to her favourite superhero, because women stick-up for each other, right?

According to one Twitter user, carrying your weapon in a dress is “surprisingly comfortable,” although it’s probably not as easy when your sword is actually made of metal.

Which begs the question, did Gadot have a half sword in her dress, or is this one of the greatest balancing acts that she can add to her already fierce CV?

With the posts still flooding in, it is clear that this has become a social media challenge that women are here for. .

When you wanna do #WWgotyourback but you’re a Harley Quinn cosplayer and this is the “most impressive” weapon you own. #WonderWoman pic.twitter.com/5uJd0H0As1