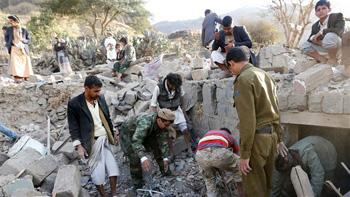 The Bab al-Mandan strait, which facilitates the transfer of 4 million barrels of oil to Middle Eastern markets everyday, has become increasingly contentious over the past few weeks as an international navel coalition grows its presence in the area.

“Recent attacks against merchant shipping in the Gulf of Aden and Bab Al Mandeb have highlighted that there are still risks associated with transits through these waters,” the leadership of the Combined Maritime Forces, which boasts vessels from 31 nations, said on Monday. The U.S.-led group is based in Bahrain and guards the Gulf of Aden.

In early June, unidentified forces attacked a Marshall Islands-flagged tanker from a vessel disguised as a fishing boat. Three grenades later, no member of the tanker’s crew suffered any injuries and it continued its voyage into the Red Sea.

In January, Houthi rebels, backed by Iran, attacked a Saudi frigate in waters near Yemen. Two people died in what the KSA said was a suicide attack.

Other waters near Yemen have seen attacks. Last night, Saudi Arabia’s state-run news agency reported that Houthis targeted an Emirati vessel as it departed from the Red Sea port of Mokha. The incident did not damage the ship, but one sailor suffered wounds. San’aa-based Al-Masdar news said the incident involved the Yemeni navy attacking a Saudi vessel carrying ammunition to its allied forces, but this claim appears erroneous. “Death to America, death to Israel!” can be heard in the background of a video of the attack posted by the same site, which editorially favors the Houthis.

Vessels in the Gulf of Aden have also had a few close calls on pirate attacks, which were ultimately thwarted by CMF ships nearby. The total number of incidents is still far below figures from 2011, a period in which Somali pirates carried out 237 attacks and took hundreds of people hostage.

The humanitarian crisis in Yemen worsens as the proxy war between Iran and Saudi Arabia rages on, and control over the Bab al-Mandab strait is the grand prize for the victor of the Yemeni civil war. The narrow waterway sees the passage of billions of dollars worth of crude supplies and other goods every year, including aid to Yemen, whose entire health system is on the “brink of collapse” in the wake of a cholera outbreak, according to the International Committee of the Red Cross.

This small lithium company is on the verge of becoming the next big thing in the resource space. With incredible assets and a management dream team it should be on every investors radar
For Iran and Saudi Arabia, tight control over the strait equates to domination of African energy markets, which expect to see exponential growth in oil and natural gas demand in the next decade.

Back in the United States, congressional leadership has failed to garner enough votes to block President Donald Trump’s planned sale of $500 million in weapons to Saudi Arabia. Democratic Senator Chris Murphy and Republican Senator Rand Paul had been campaigning to get the bill passed for several days, but the initiative failed with a 47-53 vote. Still, the lawmakers believe the bill serves as a warning for Riyadh.

“This is an important message to the Saudis that we are all watching,” Murphy said after the vote. “And if they continue to target civilians and they continue to stop humanitarian aid from getting into Yemen, this vote will continue to go in the wrong direction for them.”

Paul tweeted: “We can’t make them be like us, but we don’ have to encourage their behavior by giving them weapons that may fall into the hands of enemies.”

Trade routes surrounding the Suez Canal are already geopolitically tense from the Gulf spat between Saudi Arabia and Qatar. New attacks on vessels crossing the Gulf of Aden and the Red Sea add fuel to the fire, as American and European leaders take a hands-off approach to the Yemen crisis.

By Zainab Calcuttawala for Oilprice.com