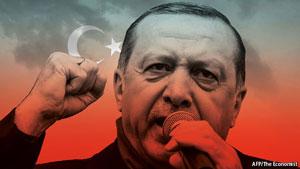 President Recep Tayyip Erdoğan has indicated the possibility of legal action against the main opposition Republican People’s Party (CHP) for commencing a “justice march” from the Turkish capital Ankara to Istanbul.

“It is not right [for the CHP] to initiate such a march … If the justice system also invites you to visit some places, don’t be surprised,” Erdoğan said in a speech at a general session of the Turkish Exporters Assembly (TİM) on June 17.

“If we and our NGOs do not respect the separation of powers, we will get nowhere. If you have something to say on that issue you can say it. But if you try to be an element of oppression, do not forget that the 138th article [judicial independence] does not only apply to politicians but also applies to everyone from A to Z. Don’t be surprised if the judiciary invites you somewhere too,” he added.

The president also stated that calling on citizens to “take to the streets while disregarding the constitution” benefited neither the CHP nor Turkey.

“Wandering around with ‘justice’ placards does not bring justice. If you want to seek justice, then the place in Turkey to find justice is the parliament,” he said.

In a speech later in the day, Erdoğan also likened the CHP’s march to the activities of July 2016 coup plotters, vowing that the government would not allow blocking of roads or similar actions during the march.

“What difference do you have from [the coup plotters] on July 15? They had F-16s in their hands and they were attacking with helicopters and tanks. You are now marching on the roads and resting at night. But if you try to say ‘We will also occupy the TEM or E-5 [highways]’ then the situation becomes the same as July 15 and of course we do not have the luxury to allow that. What they are doing now is not legal already,” Erdoğan said at an iftar dinner with the representatives of media outlets at the Huber Palace in Istanbul.

CHP leader Kemal Kılıçdaroğlu commenced a march from Ankara to Istanbul on June 15 in protest at the arrest of CHP deputy Enis Berberoğlu who was sentenced 25 years in prison for “leaking state secrets” in the case into weapons-loaded Syria-bound trucks of the National Intelligence Agency (MİT).

Kılıçdaroğlu is set to march over 24 days from the capital to Istanbul, a distance of around 450 km, to the Maltepe Prison where Berberoğlu is in jail. The CHP head is walking during the days and stopping at various locations along the way at night.