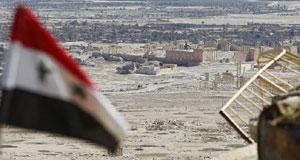 President Donald Trump has ordered stepped-up military operations against Islamic State and delegated more authority to his generals, but without a comprehensive Syria strategy, his approach risks further confrontation with Syria, Iran and even Russia, according to U.S. officials and analysts.

While the U.S. military’s shootdown of a Syrian jet on Sunday was a rarity in modern warfare, the first in 18 years, it was not an isolated incident.

The United States has taken a series of actions over the past three months demonstrating its willingness to carry out strikes, mostly in self-defense, against Syrian government forces and their backers, including Iran.

In April, Trump ordered cruise missile strikes against a Syrian airfield from which Washington said a deadly chemical weapons attack was launched. Since then, the United States has repeatedly struck Iranian-backed militia and last week even shot down a drone threatening U.S.-led coalition forces.

These incidents, however, are tactical, not part of any U.S. strategy in Syria, analysts said.

Both the administration of former President Barack Obama and Trump’s have focused exclusively on defeating Islamic State, but with the militants’ self-proclaimed caliphate shrinking, U.S.-backed and Syrian-backed forces appear to be competing for territory.

“There isn’t an over-arching U.S. strategy driving this,” said Charles Lister of the Middle East Institute.

The larger problem, the officials and analysts said, is that Trump and his national security team have not advanced a long-term political strategy for Syria’s future.

Like Obama, Trump has focused on Islamic State, leaving for later the question of Assad’s fate and the region’s mangled alliances.

“We have never had a coherent Syrian strategy,” said one U.S. official, speaking on condition of anonymity. “We oppose Assad, but our main enemy is ISIS, which also opposes Assad. Our most capable allies are the (Kurdish) peshmerga, but Turkey, who is a NATO ally and host to an airbase that is central to our efforts, considers the Kurds enemies.”

Jennifer Cafarella, of the Institute for the Study of War, said the U.S. strikes are unlikely to deter Assad and his backers.

“The absence of a civilian-led U.S. strategy in Syria and the narrow U.S. military focus on ISIS will continue to provide an open invite for the pro-Assad regime coalition to extend and escalate,” Cafarella said.

A White House spokesman did not respond to calls and an email seeking comment. A senior White House official said: “The strategy for Syria is to defeat ISIS and first and foremost achievement of a de-escalation of the conflict so we can work toward a political resolution. We’re not close to that, but that’s the strategy.”

Russia reacted angrily to the U.S. shootdown of the Syrian jet, which the Pentagon said was dropping bombs near the U.S.-backed Syrian Democratic Forces, a mixed Kurdish-Arab militia fighting Islamic State.

Moscow said it would treat U.S.-led coalition aircraft flying west of the River Euphrates in Syria as potential targets and track them with missile systems and military aircraft. It stopped short of saying it would shoot them down.

The White House said on Monday that coalition forces fighting Islamic State militants in Syria would retain the right to self-defense, and said the United States would work to keep lines of communication open with Russia.

In another complication, Iran on Sunday launched ballistic missile strikes at Islamic State targets in eastern Syria, the first time it has carried out such an action.

U.S. intelligence analysts quickly concluded that Iran fired the missiles mostly in retaliation for a pair of Islamic State attacks earlier this month on Iran’s parliament building and the tomb of the Islamic Republic’s founder.

A second U.S. official said the use of ballistic missiles may also have been intended as a signal that Iran remains committed to supporting Assad and a reminder that U.S. forces and bases in the region are within reach of Iranian missiles and ground forces.

As it tries to craft a Syria strategy, the Trump administration is divided between those who consider Islamic State the primary enemy and some officials who think the war in Syria is part of an existential struggle between the United States and its Gulf allies on the one hand and Iran on the other, said a third U.S. official, who has participated in government deliberations on Syria.

Some Trump appointees saw Iran’s missile strike as an illustration of Tehran’s regional ambitions, which they have argued make it an existential enemy, according to the three U.S. officials.

These Iran hawks, they said, are pushing for a Syria strategy that calls for concentrating first on defeating Islamic State, then turning on Iran and its allies, including Assad, Lebanon’s Hezbollah, Iraq’s Shi’ite militias, and Houthi rebels in Yemen.