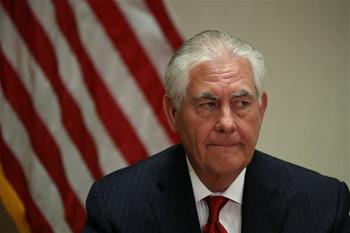 NEW YORK, June 20. /TASS/. US Secretary of State Rex Tillerson has crafted a three-point framework for developing a constructive working relationship with Russia on a limited set of issues, the BuzzFeed portal has reported citing officials in the State Department.

The framework is a classified document that has not previously been revealed, the portal says. The first pillar is to convey to Moscow that “aggressive actions” against the United States will be counterproductive for both sides. In particular, this relates to selling arms to the Taliban in Afghanistan and incidents with US diplomats in Moscow. In each case the US side will have to “push back,” the report says.

The second pillar is to foster cooperation with Moscow on the issues that are of strategic interest to Washington. Among them is the conflict in Syria, the fight against the Islamic State terrorist group (outlawed in Russia), denuclearization of the Korean Peninsula and cyber security. The third pillar is “strategic stability” with Russia, which encompasses a range of long-term mutual geopolitical goals.

On June 15, the US Senate unanimously approved a bill on introducing new sanctions against Russia and confirming the already existing restrictions. Besides, the senators want to strip the White House of the right to unilaterally ease sanctions. For that, the president has to give Congress an exact list of people, against whom sanctions should be lifted, and also assure the legislators that Russia has changed its policy in a number of areas, including Syria and Ukraine. After studying these materials within 30 days both houses should voice their opinion through passing a resolution.

Tillerson told the House of Representatives’ foreign affairs committee earlier that Russian-US relations were getting worse. He said that such a state of affairs posed a threat to peace and that the world’s two greatest nuclear powers could not afford to have a relationship of this kind.

In late December 2016, the Obama administration introduced a new round of sanctions against some Russian companies, the Federal Security Service and the Main Intelligence Agency of Russia’s General Staff. Besides that, US authorities expelled 35 Russian diplomats and shut down two Russian compounds in New York and Maryland. Washington attributed these sanctions to cyber attacks against US political institutions, accusing Russia of being involved. However, Moscow fully rejected all allegations.