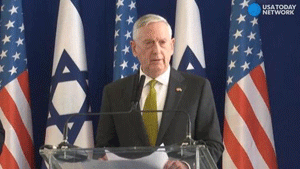 Mattis also stressed that weapons provided to the YPG militants will be taken back after the Islamic State of Iraq and the Levant (ISIL) is defeated.

The U.S. is in a “forced cooperation with the YPG on the ground in order to defeat ISIL in Syria,” Defense Ministry sources quoted the U.S Defense Minister as saying in a letter sent to Işık last week.

Washington wants to be transparent in its ties with the YPG, Mattis said, listing the arms provided to the Syrian Democratic Forces (SDF), a Kurdish-Syrian Arab alliance dominated by the YPG militia, and saying that those weapons delivered in May were for the Raqqa offensive.

Sources say he assured Ankara that the arms will be collected back from SDF fighters just after ISIL is defeated in Syria, adding that 80 percent of the forces that will capture Raqqa will be formed of Arabs and the force to hold the city will be made up of Arabs.

U.S.-Turkey ties are part of a strategic partnership that goes far beyond just defeating ISIL, Mattis wrote to Işık, assuring that American experts will work in Syria in order to ensure that the arms stay in the country.

Mattis said he wants to have face to face discussions with Işık on the sidelines of a defense ministers’ meeting in Brussels on June 29.

The Pentagon on May 30 said it had begun to transfer small arms and vehicles to the Kurdish elements of the Syrian Democratic Forces (SDF), a Kurdish-Syrian Arab alliance fighting ISIL and dominated by YPG fighters.

In announcing the decision, the Pentagon said the U.S. is “keenly aware” of Turkey’s security concerns.

Ankara considers the YPG to be linked to the PKK and has long pressed Washington to stop its support for the group, saying the arms provided to the group are handed over to the PKK.