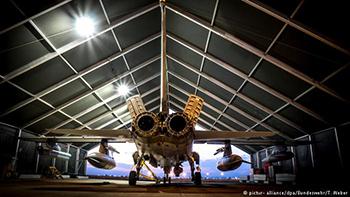 Germany’s parliament has formally approved the withdrawal of Bundeswehr troops deployed at the Incirlik airbase in southern Turkey. Lawmakers said they regretted Turkey’s decision to block their visits to the facility.

Germany’s parliament, the Bundestag, on Wednesday backed the plan to move some 260 soldiers currently at Incirlik to an air base in Jordan. There were 461 votes in favor of the withdrawal, 85 against and 23 abstentions.

In a statement, the parliament said it expected the redeployment to proceed swiftly. “With the move out of Incirlik, we’ve reached a temporary low point in our relations with Turkey,” said SPD lawmaker Niels Annen. The Left party’s Gregor Gysi described Turkey’s decision to ban German parliamentarians from visiting the strategic base as an “affront.”

German troops and military planes have been stationed at the Turkish base near the Syrian border as part of the international fight against the “Islamic State” extremist group.

The plan to move the troops had already been given the green light by Chancellor Angela Merkel’s Cabinet, but every deployment abroad requires support from a simple majority in parliament.

Ankara has refused to allow German politicians to make what they see as a routine visit to Incirlik, saying that Berlin needs to improve its attitude toward Turkey first.

“The German Bundestag regrets very much that conditions for the continued stationing of the Bundeswehr in Incirlik are not met,” the Bundestag said in a statement. The parliament added that its members must have access to troops stationed abroad in order to fulfill its constitutional duties.

Relations between Turkey and Germany have deteriorated over a range of issues in the past year. One reason for that is Germany’s decision to grant asylum to Turkish soldiers and diplomats who Ankara accuses of participating in last year’s coup attempt.

Ties between the military allies have also soured over Turkey’s imprisonment of two German journalists, and Berlin’s decision to ban planned campaign rallies in Germany by Turkish politicians earlier this year.

The decision to move Bundeswehr forces out of a NATO member country and to territory outside the bloc is unprecedented. German Defense Minister Ursula von der Leyen said that, although German soldiers were leaving NATO territory, they would be going to a base in Jordan that is occupied by many other NATO partners.

According to analysts, the withdrawal may cause a short term setback for allied forces fighting the “Islamic State” in Raqqa, but will not result in any long-term impact on the operation.