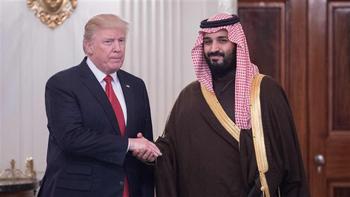 Saudi Arabia’s King Salman has taken a bold move by changing the line of succession in the Kingdom. His original heir, his nephew, Prince Mohammad bin Nayef has been replaced by his own son Mohammed bin Salman. Political scientist and RIA Novosti contributor Gevorg Mirzayan explained what Moscow should expect from the new heir.

Most monarchies in the Western world choose heirs by absolute primogeniture, whereby the eldest son or daughter becomes the next in line to succession, followed by their eldest son or daughter, or their brothers and sisters. In Spain, males are given priority, while other European countries have eliminated this bias.

But in Saudi Arabia the choice of heir is often passed down through a more opaque and complex system.

Political scientist and RIA Novosti contributor Gevorg Mirzayan, associate professor at the Department of Political Sciences at the Finance University of the Russian Government, attempted to unravel this system and tried to forecast what Moscow should expect from the new heir.

Since the death of the founder of modern Saudi Arabia, King Abdulaziz al-Saud (usually referred to as Ibn Saud), in 1953, control of the absolute monarchy has been passed between his sons. In the middle of the 20th century such a line of succession was in particular need as it “stitched together” Saudi Arabia from a large number of tribes, Mirzayan explains in his op-ed for RIA Novosti.

When Ibn Saud conquered Arabia (in 1902), he formed alliances through polygamous marriages to members of its biggest tribes. This strengthened his power within the Al Sauds and expanded his legitimacy in Arabia, while yielding nearly a hundred children, sixty of whom were boys.

However, by the end of the 20th and the beginning of the 21st centuries, the system had become an anachronism. The children of the late king are too old and the official heirs have started dying before the king on the throne (the reason why Riyadh was forced to introduce the title of “a heir to the heir” or Deputy Crown Prince).

Nobody knew what would happen after the last surviving sons of Ibn Saud died. What would be the principle for the appointment of a king from among Ibn Saud’s grandchildren? And which clan he would come from?

The current King Salman, who has been ruling since 2015, belongs to the strongest and the most powerful clan of Ibn Saud’s children, the Sudairi, the clan their mother, one of Ibn Saud’s favorite wives, Hassa al-Sudairi, once belonged to.

Thus King Salman decided that the first monarch from the third generation of Ibn Saud’s heirs will come from his clan. He started to implement the so-called “road map” for it long ago.

On January 23, 2015, upon King Abdullah’s death and the accession of King Salman, Muqrin became Crown Prince and First Deputy Prime Minister. However already in April of 2015, King Salman forced his brother to leave the post through certain behind-the-scenes games.

As Prince Muqrin is the youngest surviving son of King Ibn Saud, King Salman got the full right to choose an heir from the generation of grandchildren. However he could not do it all on his own; the choice requires the approval of the rest of the Royal Clan. He could not chose his son Mohammed bin Salman right away.

Thus on April 29, 2015, King Salman replaced Prince Muqrin with his nephew, Prince Muhammad bin Nayef as Crown Prince, and he became the first in line to the throne of Saudi Arabia.

He also held the post of interior minister, which he inherited from his father, Nayef bin Abdulaziz Al Saud, who was also one of the Sudairi Clan and was also Crown Prince of Saudi Arabia from 2011 to 2012, but died in 2012, before then-King Abdullah.

But who was the real heir?

However very soon everyone saw that the Deputy Crown Prince was too active for his post. Mohammed bin Salman was responsible for the country’s foreign policy and economic reforms. He was behind the Kingdom’s much-talked about “Vision 2030” project, which planned to wean the country from oil.

Faced with this energetic younger rival, Crown Prince Muhammad bin Nayef got lost and withdrew into the shadows.

Leonid Isaev, an expert in Middle Eastern affairs at Moscow’s Higher School of Economics noted that the policy seemed wrong. With the post of an interior minister and the status of the chief of the fight against terrorism, the Crown Prince had room for maneuver. Besides, he enjoyed support in the country.

Several months ago, Isaev said, a number of the country’s Sheikhs wrote a letter to the King asking him not to change the line of succession.

However, the Crown Prince’s circle of advisors decided against challenging Mohammed bin Salman, which was backed by his living father, to freeze the status quo and simply sit it out waiting for the change of the King. And then remove his heir.

The strategy had ample justification: the operations which Mohammed bin Salman was responsible for failed one after another and cost the Kingdom billions of dollars, with the war in Yemen being a prime example. However it did not take into account the family ties, which buried the heir long before the king.

“Muhammad bin Nayef belongs to a Clan which goes back to the Qatari family Al Thani. Thus his circle had close ties with Qatar, was focused on contacts with Doha and was almost seen as Qatari lobbyists,” Isaev said.

When the crisis between Qatar and Saudi Arabia broke out, it turned out that Saudi Interior Minister and the Chief for the fight against terrorism got marred in the relationship with the “chief sponsor of terrorism in the Persian Gulf.”

Thus he encountered very serious pressure and was forced to capitulate. Muhammad bin Nayef not only voluntarily resigned but, according to Saudi media, has already sworn an oath to the new Crown Prince.

At first sight, the Kingdom can relax: the mess with the change of monarchs every two years is set to end with the death of 81-year-old  King Salman: his 31-year-old son is sound and well. Leonid Isaev even suggested that the authorities could cancel the title of the Deputy Crown Prince, which they introduced in 2014 – why breed a competitor who would scheme against Mohammed bin Salman?

However a number of experts believe that as the King, Mohammed bin Salman won’t bring any stability to Saudi Arabia. He lacks qualification for such a post and the responsibility it implies.

“He is still very young and inexperienced, a quintessence of the young Saudi elite, ambitious and prone to emotions. He is very hard to negotiate with, as he acts ad hoc and lacks pragmatism,” Leonid Isaev said.

He cited as an example the so-called “Yemeni dossier.” For three decades it was dealt with by old guard Saudis, very cautious and pragmatic. And all the emerging crises have been more or less settled. For example, the 2011 Yemeni Arab Spring was settled very professionally, he said.

However when back in 2014 this dossier got into the hands of Mohammed bin Salman, everything got done wrong.

The thing is, the expert said, that in the current situation, given the defeat in Yemen and Syria, the crisis within the Saudi bloc and low oil prices, the Saudis can’t afford an adventurous King, such a “Saudi Trump”. This is how some Arabs have already called the new Crown Prince.

For Moscow, Isaev said, a “Saudi Trump” will bring no good.  He would be hard to find an agreement with.

“We will be dealing with a very ambitious personality in the Saudi-Qatari relations. And if something displeases him, he would easily resort to very abrupt moves, which will only complicate the relations,” he said.

The expert further suggested that with Mohammed bin Salman as the King, the Saudis will very likely continue sponsoring terrorism. It is already a well-known fact that Saudi Arabia and Qatar provided financial and military support to Daesh.

The Saudis will likely continue to impede Russian operations in Syria. Besides, it is highly unlikely that the young King will be pragmatic enough to agree to the Moscow line of balancing between Saudi Arabia and Iran in Middle Eastern affairs. He is very unlikely to understand and accept the fact that Moscow can be neither bought nor rented in this issue.

On the other hand, at the end of May, Mohammed bin Salman visited Moscow and met with President Putin. They discussed a wide range of issues from oil prices to cooperation between Russia and the so-called “Arab NATO” which is being pushed for by Riyadh with the support of the US.

However, it might happen that Kremlin won’t have a chance to work with Mohammed bin Salman. There is every chance that he is going to be deposed after the death of King Salman (as it was a very radical decision), especially if the King passes away in the sort-run.  Thus the Crown Prince should be very interested  that his father lives as long as possible,  Mirzayan concluded.