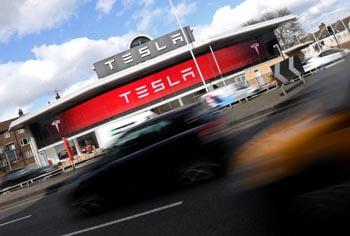 If you look at how Tesla, Inc., has performed on the stock market, you’ll see the electric automaker has the majors beat.

If you take a look at stock price performance by the largest automakers in global sales – Volkswagen, Toyota, General Motors, Ford, and Honda – you’ll see those share prices languishing over the past year. You’ll also see that Tesla’s market capitalization, at $61 billion, beats most of them and comes in at a close second behind Volkswagen.

Not bad for a company that sold about 76,000 vehicles last year worldwide and has yet to achieve a real quarterly profit. Volkswagen, which was the top global seller last year as it came through its “dieselgate” scandal, sold 10.3 million vehicles worldwide in 2016.

Shareholders are putting a lot of pressure on major, older automakers to boost profitability while also maneuvering efficiently as electric, autonomous vehicles, and ride-hailing apps such as Uber and Lyft shake up the industry.

Earlier this month, General Motors shareholders sided with company executives such as CEO Mary Barra to reject a proposal by investor David Einhorn of Greenlight Capital. The hedge fund billionaire attempted to split GM’s stock into two classes – one designed for big dividend returns and another designed to reward shareholders if the automaker’s profits and stock price grows. Einhorn also wanted to nominate his own slate of directors.

Ford Motor Co. shareholders have been putting a lot of pressure on the company to increase profit performance. That conflict led to the recent ouster of CEO Mark Fields.

Tesla, Inc., has had a very different tale to tell.

During the company’s annual meeting earlier this month in Mountain View, Calif., shareholders considered a proposal from a group of Connecticut pension funds for directors to face re-election annually, rather than serve staggered three-year terms. While the proposal failed, the company said it would consider potential independent directors and would add two or three to the seven-person board. More will be announced by Tesla in the coming months.

Most investors know NOTHING about the most expensive real estate in the world… Or how to profit from it. Our latest free report uncovers this incredible yet unknown opportunity.
Some of that proposal was about not allowing CEO Elon Musk to have too much control over the company. Overall, they’re quite pleased with the company’s performance and surging stock prices.

Tesla is considered to be one of the leading cleantech companies to follow by investors. It’s one of many stocks doing much better than performance measures seen in the global auto industry.

Cleantech Group’s index, considered to be the leading global index of publicly traded clean companies, has been similar to the overall stock market this year in strong performance.

Cleantech Group reports that it’s been a stellar year for its index, with price returns up 12.5 percent through the end up April. Last year ended at an 11.2 percent increase. As for years seeing declines in the index, these included 2008, 2011, and 2014; with the gap narrowing in recent year with less severe losses than during the Great Recession.

Cleantech advisors say that the clean transportation, clean energy, energy efficiency, and other related sectors, are continuing to go through a period of “house cleaning.” A decade ago, they’d seen a great deal of support from Silicon Valley and venture capital firms. That was hard hit by the Great Recession – and by interest leaning toward mobile devices and digital media channels. There was also a lot of concern about companies like Fisker Automotive and A123 Systems filing for bankruptcy and needing foreign investors to bail them out.

Stock performance by Tesla is bringing much more interest in cleantech and other emerging technologies over traditional companies. Some analysts say that Tesla has its competitors beat in shareholder perception and hope rather than corporate profit statements.

By Jon LeSage for Oilprice.com