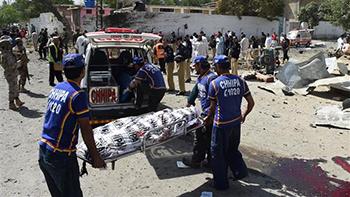 A powerful car bomb has killed at least 11 people and injured 20 others in Pakistan’s southern city of Quetta, officials say.

The explosion occurred in front of the office of Quetta’s police chief on Friday.

Anwarul Haq Kakar, a spokesman for the provincial government, said the bomb had been planted in a moving car.

“Eleven people have died… and at least 20 others are injured,” Fareed Ahmed, the medical superintendent at Civil Hospital, told AFP. He said the death toll had increased from five earlier in the morning.

Four policemen were among the dead, while three others remained in critical condition, he said.

No one claimed responsibility for the attack, but Kakar blamed neighboring India, without offering any evidence.

Quetta is the provincial capital of Pakistan’s Balochistan. The province has been the scene of gun and bomb attacks over the past years.

Thousands of Pakistanis have lost their lives in bombings and other militant attacks since 2001, when Pakistan entered an alliance with the US in the so-called war on terror. Thousands more have been displaced by the wave of violence and militancy sweeping across the country.