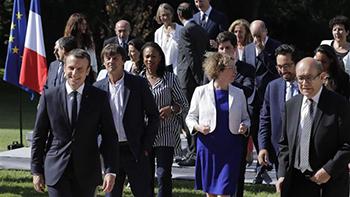 The government of French President Emmanuel Macron has proposed the outlines of a controversial anti-terrorism law that would end the state of emergency in France but incorporate several of the tough measures under the emergency into permanent law.

The proposed law was presented at the first meeting of Macron’s newly-reshuffled cabinet on Thursday.

France has in the past couple of years been the target of frequent terrorist attacks, together killing more citizens than sporadic attacks in other European countries. A series of terrorist raids in November 2015 alone killed some 130 people and led the government of the then-President Francois Hollande to introduce a state of emergency to expand the powers of security forces.

The state of emergency has since been extended five times and is expected to be extended by Macron until November 1, when the new anti-terrorism law would be prepared.

Just on Monday, a man drove a car laden with gas canisters into a police van in the French capital, Paris. No one was injured in the attack, but the driver, who had been on a terrorist watchlist and who was himself killed, had intended to cause an explosion.

The proposed law would give French authorities greater powers to act to protect an event or location thought to be at risk of an attack without first seeking permission from courts. The draft law would also allow places of worship thought to be promoting extremism to be shut down for up to six months.

The planned measures have been criticized by civil rights groups, which say the draconian measures would be trampling on civil liberties.

Amnesty International has also said the new law could be abused to disallow legitimate protests.

French policemen point their weapons near the site of an attack at the entrance of Notre-Dame cathedral, in Paris, June 6, 2017. (Photo by AFP)

But Macron’s government has insisted the law is necessary to stop terrorist attacks.

“If we want to effectively ensure the security of our citizens, we must be able to take a certain number of measures,” Interior Minister Gerard Collomb has said.

Macron, who himself won the presidential election in France on May 7 by a wide margin, received an even bigger mandate by the French electorate on June 18, when his newly established party won the majority of the seats in the parliament as well.

That would make it easy for the proposed anti-terrorism law to pass despite the criticism from civil and human rights groups.