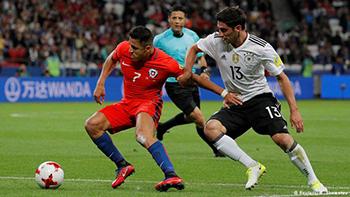 Chile might feel hard done by sharing the spoils against Germany, having controlled large portions of the game. Alexis Sanchez became his country’s all-time leading scorer and was exceptionally lively in the first half.

Coach Jogi Löw elected to adapt to the opposition in what might yet prove to be a preview of the Confederations Cup final. To compensate for Chile’s attacking zeal and tough tackling, Löw chose seven outfielders best known for their defensive talents. The trio of attacking midfielders Leon Goretzka, Julian Draxler and Lars Stindl played ahead of a back three, two wing backs, and a pair of holding midfielders.

But Germany’s stacked defense gifted Chile with an opening goal within minutes. Shkodran Mustafi gave the ball away to his Arsenal club teammate Alexis Sanchez, who exchanged passes with Arturo Vidal and then beat Marc-Andre ter Stegen at his near post.

The Chilean therefore scored his 38th goal for his country, becoming Chile’s most prolific marksman in the process. FIFA, meanwhile, was keen to point out another milestone – the goal was the 400th in Confederations Cup football.

Sanchez comfortably put in the performance of the first half, tormenting Matthias Ginter and Mustafi on several occasions, most notably the cheekiest of back-heels in the box.

Chile nearly doubled their lead when Eduardo Vargas pulled the trigger from distance around 20 minutes in – his shot beat ter Stegen but rattled the crossbar and stayed out.

Just as it seemed Germany would go an entire half without any real scoring chance, Emre Can picked the Chilean lock with a weighted pass out to the left flank. Jonas Hector was on hand to cross, and Lars Stindl – the closest thing Germany had to a striker on the night – netted his second in as many Confederations Cup games. The 28-year-old Gladbach player is not the most likely to earn himself a World Cup ticket, but it’s hard to fault his efforts to make an impression as simultaneously one of the oldest and yet least experienced internationals in this German squad.

Germany managed to carve out more chances in the second period, but over the course of the game Chile seemed more robust at the back and more purposeful in attack – driven by the ubiquitous Arturo Vidal and man-of-the-match candidate Sanchez. Joachim Löw might have spared the occasional thought for some of the superstars he decided to grant an extended summer holiday during the match.

The coach will have to wait for his 100th victory in charge of the German national team – at least until the final group game against Cameroon on Sunday.