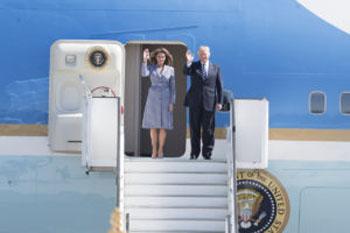 Donald Trump just got his travel ban. At least, most of it…

Although the Supreme Court left parts of the lower-court-ordered suspension of his travel ban intact, and agreed to consider the merits of the case in October, a considerable portion of it can now go into effect.

The path to entry into the US for immigrants and refugees from the affected nations, if they don’t have existing ties to the US – either through family, schools or employment – just became considerably harder.

It didn’t take long for the president to take a victory lap, via official statement. He touted the “unanimous” nature of the court’s unsigned opinion and called it a “clear victory for our national security”.

While his victory wasn’t complete – as he acknowledged, it will “become largely effective” – the way the court decided the case makes it a significant win for Mr Trump.

The decision marks a reaffirmation of the sweeping powers the president has traditionally been granted by the courts in areas of national security.

There was fear in some quarters that the administration’s ham-fisted implementation of its immigration policy could do lasting damage to the president’s prerogatives. That appears not to be the case.

The government, the justices write, has a “compelling need to provide for the nation’s security”. That includes being able to close the borders based on an evaluation of the potential of foreign threats – at least for now.

Unlike the lower court judges, the Supreme Court justices set aside concerns that the travel ban amounted to unconstitutional religious discrimination by focusing exclusively on countries with majority Muslim population.

They paid no heed to Mr Trump’s sometimes controversial statements and tweets or comments by his surrogates and staffers as to the motivation behind the immigration measures.

Instead it was all about the justices’ interpretations of current law and an affirmation of presidential authority.

Those constitutional issues may come up in the autumn, when the Supreme Court justices will fully consider the arguments on both sides next autumn.

Of course, by that time it may not matter. The administration has three months to conduct its “executive review” of immigration policy and devise new guidelines.

The “ban” as it is currently constructed may be a distant memory by then, replaced with something more permanent – perhaps even more sweeping.

In the meantime, the gates to America just got a bit smaller.