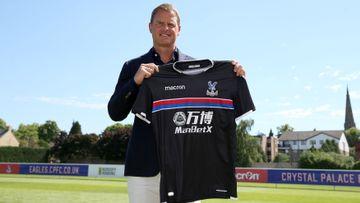 New Crystal Palace manager Frank de Boer says he is excited to join a club that “spend a lot of money”.

“The aim is to be a solid Premier League team, not to struggle with relegation,” said the former defender, who won 112 caps for the Netherlands.

He had been out of work since being sacked by Inter Milan in November after only 85 days in charge, though he said he learned “a lot” from his time at the San Siro.

De Boer said he had a “good feeling” about Palace and “the prospect of managing a team in the Premier League was exciting”.

“This club can grow further and further,” he said. “They spend a lot of money and there is the possibility to do something well with that money.

“I’ve not met the players yet. We will look at one or two signings, but I think it is necessary to see all the players here first.”

American billionaires Josh Harris and David Blitzer took a large stake in the club in December 2015 and promised significant investment.

And the Eagles earned over £109.6m in television and prize money after finishing 14th in the Premier League last season.

“I have my own type of coaching and style of playing. We want to be dominant when we can, but also dominate when we don’t have the ball,” he said.

“Also, for the fans, we must try to be attractive. Palace has a very enthusiastic and passionate fanbase, so they will want to see that.”

Eagles chairman Steve Parish said he had been “surprised” by Allardyce’s departure but had consulted with the former England boss about his successor.

He added De Boer’s experience of developing young players was one of the attributes that made him suitable for the Selhurst Park club.

“It’s fantastically exciting for this football club, an amazing milestone for us,” said Parish.

“I am excited to work with him and by what we can achieve with the club.”

De Boer had stints at Ajax and Barcelona, as well as six months at Rangers, during his playing career. He was Netherlands assistant manager from 2008 to 2010.

“If he was just coming from Holland, I think he would have found it difficult, because in Holland it’s about playing beautiful football and sometimes it’s more about playing rather than winning,” Taylor said.

“But I think being in Italy and playing at Rangers, he will know the competitiveness of the Premier League, and I think that will help him.”

De Boer stepped down at Ajax days after missing out on a fifth league title to PSV Eindhoven on the final day of the 2015-16 campaign.

He is thought to have impressed the Palace hierarchy with his knowledge of the club and his footballing vision.

It is said the respect and humbleness he showed was striking, especially given how much he achieved as a player, including winning 112 caps for the Netherlands.

The former Ajax, Barcelona and Rangers defender is understood to have committed to giving players from the existing squad a chance to impress before looking to make new signings.

Palace have invested heavily in recent transfer windows, but will back De Boer and have made him aware of their budget.