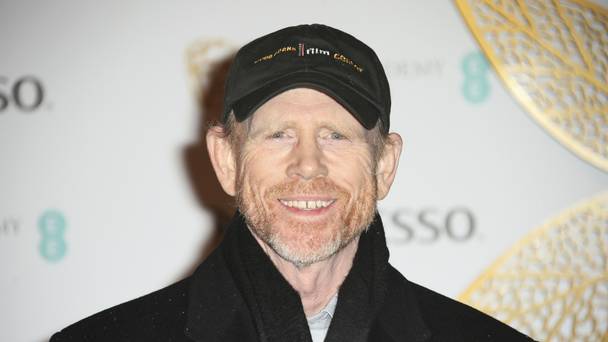 When the SOS call from Lucafilm boss Kathleen Kennedy was sent it was so simple it could have been written straight out of a Star Wars script: help me Obi-Ron Kenobi, you’re my only hope.

Today is Ron Howard’s first day on the set of the Star Wars Han Solo spin-off film in London, parachuted into the troubled production to replace sacked directors Phil Lord and Chris Miller.

What happens next is pivotal, and will determine whether Howard can get the film back on track, and whether the whole episode, which has exposed fractures within the Disney-Lucasfilm vision for Star Wars, will leave lasting bruises.

To say the episode has become the talk of Tinseltown is an understatement.

Moreover, the ejection of Lord and Miller from the project has rattled the film business, not just because the Star Wars film, merchandise and money making machine seemed like a force as impregnable as the Death Star itself, but because at first glance the pairing seemed ideal.

The Han Solo film is the second planned Star Wars spin-off film, the first having been the more-successful-than-anyone-predicted Rogue One. But that film was dark and dour, set in the days before the shadow of the Death Star was cast across the subjugated Galactic Empire.

The Lord and Miller film was to be a lighter touch: a wild space western origin story for Star Wars‘ most lovable rogue, the smuggler Han Solo of “hokey religions and ancient weapons are no match for a good blaster at your side”, “it’s the ship that made the Kessel Run in less than twelve parsecs” and “who’s scruffy-looking?” fame.

And as directors Lord and Miller were logical choices, a pair of college buddies who became filmmakers, went on to direct 21 Jump Street (2012) and The Lego Movie (2014), and spoke the conversational dialect of true Star Wars geeks.

Like Russell T. Davies and Steven Moffat’s Doctor Who, or the Moffat-Mark Gatiss pairing for Sherlock, this was supposed to be a lunatics-taking-over-the-asylum moment with the same near-perfect outcome.

But somewhere in there it all came unstuck.

The influential trade newspaper The Hollywood Reporter suggests Kennedy was frustrated by a lack of camera coverage (that is, fewer than expected shots from each scene to be used in the editing room) and, thanks to Lord and Miller’s affection for improv, deviations from the script as it was written.

There are even suggestions of a deeper malaise within Lucasfilm: Rogue One director Gareth Edwards had writer Tony Gilroy brought in to help him, and Josh Trank, brought in for another standalone Star Wars project, likely a Boba Fett movie, was also shown the door.

But to suggest these are teething problems is to ignore the weight of the franchise’s own history, and the plain and early ambition of Lucasfilm founder George Lucas to expand Star Wars beyond the framework of the original three, then six, and now nine “episode” films.

For proof of that one need only look to Lucas’s own efforts with the (awful) Star Wars Holiday Special and the (only marginally less awful) Ewok movies, Caravan of Courage and The Battle of Endor; all three are ropey at best, but in a courtroom we’d call them exhibits A, B and C.

Even back in 1978 (and 1984 and 1985) Star Wars was itching to stretch beyond the sometimes confining space opera of Jedi knights, Sith lords, lightsabers, Death Stars and Skywalkers. (Oh, my!)

But how that was to be achieved has proved over the years to be a more complex algorithm.

The proof of that lies in the franchise’s first offspring, The Star Wars Holiday Special, which was, aside from the introduction of bounty hunter Boba Fett, a horrifying mishandled mess of disco, vaudeville, cheap laughs and bad writing.

Only Carrie Fisher didn’t seem to mind it: so high during production, she later said, she didn’t even remember making it.

Lessons learned from it? Never give a Star Wars script to writer who works on awards show telecasts, never let the toys – in this case, the launch of the now iconic Kenner toy line – dictate the story, and never stray too far from what the audience love.

The Star Wars Holiday Special also left us with one curious footnote: it was the first Star Wars project to lose a director midway through production, when David Acomba exited and was replaced by Steve Binder.

A slightly disturbing omen? Or a vergence in the Force, if, as Yoda would day, believe in such things you do.

The key to why the SOS was call made to Howard is elegantly simple: he’s a talented director with a particular knack for working with actors. He is also, significantly, a friend of Star Wars creator George Lucas. (No one mention the prequels.)

There is little doubt that a director of Howard’s magnitude was needed, in part to soothe the tensions of an already frazzled set but also – and mostly – to allay the fears of the business at large that Disney-Lucasfilm’s most valuable asset had become a runaway train.

Still, there is something in all of this which reminds us of Superman II, the highly anticipated 1980 follow up to DC Comics’ first great cinema masterpiece, which was seemingly torn to shreds behind the scenes when director Richard Donner was sacked and replaced with Richard Lester.

By that stage Donner had filmed roughly three quarters of the film, though two thirds of that material was stunningly junked, notably sequences with acting legend Marlon Brando, and partly re-shot by Lester.

It took 26 years for Donner to be vindicated, in a specially released edit of the film, Superman II: The Richard Donner Cut, which was assembled using surviving unreleased elements of the original film, including Brando’s scenes, incomplete effects sequences and even audition scenes shot by the actors.

And it was, for all its flaws, a masterpiece.