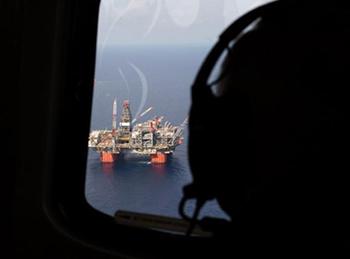 About 300 BP workers commute 150 miles here by helicopter, from the Louisiana coast to a deep-sea drilling platform that can produce more oil in a day than a West Texas rig can pump in a year.

On the deck of Thunder Horse, they work two-week shifts, drink seawater from a desalination plant, and eat ribs and chicken ferried in by boat. On the ocean floor, robots provide remote eyes and arms as drills extract up to 265,000 barrels per day.

“There’s a whole city below us,” said Jim Pearl, Marine Team Leader on the platform.

This is just one of the four Gulf of Mexico platforms on which BP has staked its future in U.S. oil production.

Seven years after its Deepwater Horizon explosion and oil spill, BP is betting tens of billions of dollars on the prospect that it can slash the costs of offshore drilling by half or more – just as shale oil producers have done onshore.

The firm says it can do that while it continues to pay an estimated $61 billion in total costs and damages from the worst spill in history – and without compromising safety.

BP’s Gulf platforms are key to a global strategy calling for up to $17 billion in annual investments through 2021 to increase production by about 5 percent each year, Chief Executive Officer Bob Dudley recently told investors.

“Our strategy is to take this investment that we spent so much money building, and keep it full” to the platform’s capacity, Richard Morrison, BP’s regional president for the Gulf of Mexico, told Reuters during the first tour of a BP Gulf drilling platform since the disaster. “We’re also exploring for larger pools of oil.”

BP’s deepwater double-down is all the more striking for the contrast to its chief competitors, who have cooled on offshore investments in light of the lower costs and quicker returns of onshore shale plays.

While BP has some onshore U.S. developments, the firm is notably absent from the industry’s rush into shale oil fields of the West Texas Permian Basin.

Freeport-McMoRan (FCX.N) and Devon Energy Corp (DVN.N) have pulled out of Gulf drilling entirely in recent years. Anadarko Petroleum Corp (APC.N) took a $435-million dollar write-down in May on its Shenandoah project in the Gulf, deciding it could not profit with oil prices hovering at about $50 a barrel.

“In a $50 to $60 world, we always felt like greenfield development, in the Gulf in particular, was fairly challenged,” Anadarko CEO Al Walker told investors last month.

BP says its next Gulf development – the $9 billion Mad Dog phase two – would be profitable even at $40 a barrel. As recently as 2013, BP reported that it could not start new deepwater Gulf projects at prices lower than $100 a barrel.

In time, BP’s offshore expansion could produce a huge payoff. The firm announced last month that it had discovered an additional billion barrels of oil below its four audaciously named Gulf platforms – Thunder Horse, Atlantis, Na Kika and Mad Dog.

The find – worth more than $40 billion at today’s market prices – amounts to more than three times the proven reserves at the Na Kika field, or the equivalent of three new fields in the Gulf.

“It seems like every ten years there’s another breakthrough” that unlocks more Gulf oil, Morrison said on the deck of Thunder Horse.

Over his shoulder, a drillship three miles away tapped a new well that will feed production into the massive platform.

In the wake of the 2010 BP disaster, deepwater production was curtailed by a six-month U.S. government moratorium on drilling and a longer period of uncertainty about regulation. But output has rebounded to new record highs as projects sanctioned years ago start operations and existing hubs such as Thunder Horse expand.

BP’s big new discovery is key to its slashing of estimated per-barrel costs, as are a host of drilling innovations and more favorable deals with service providers.

For eight decades, geologists have used seismic imaging to estimate oil and gas reserves beneath the rocky undersea terrain.

BP used its own new technology for the billion-barrel discovery. Called full waveform inversion, the technique uses massive amounts of data to create a high-resolution model of reserves that were previously hidden beneath salt deposits.

The firm also aims to tap those reserves without building new multi-billion-dollar platforms.

At Thunder Horse and other platforms, BP is installing wellheads on the seabed and connecting them to pipelines that rise up to existing platforms, like the legs of a spider.

These “tiebacks” allow producers to feed oil from remote regions of fields that previously went untapped.

Other design changes helped BP hold down the investment in Mad Dog’s second phase from an initially estimated $20 billion to just $9 billion, the company said. Such savings are part of the equation BP uses to estimate the platform’s profitability at oil prices of $40 a barrel.

The struggles of deepwater oil service firms – who were forced to cut prices after per-barrel prices tanked in 2014 – are also keeping BP’s expansion costs low.

“If you’re going to be building an offshore Gulf of Mexico platform, now is the time to be doing it,” said Norm MacDonald, portfolio manager for Invesco’s energy fund, which has increased its stake in BP, its second-largest holding.

Other funds remain leery of offshore investments because of the longer wait for a return in a volatile industry.

Shale has a “liquidity premium” because producers can make smaller investments and recoup them sooner, within two or three years, said Michael Roomberg, a portfolio analyst at Miller-Howard Investments.

Tie-backs and other advances, however, could accelerate deepwater returns and help narrow the liquidity gap with shale, MacDonald said.

BP’s growing deepwater investments irk some environmentalists, who say the company has fought paying what it owes to restore shorelines and communities damaged by its massive spill.

They also see the threat of another disaster.

Richard Sears – who served as chief scientist on the National Commission on the BP Deepwater Horizon Oil Spill and Offshore Drilling – said such projects can be managed safely at low oil prices.

The causes of the BP disaster had more to do with poor decision-making and slipshod safety systems than cost-cutting, said Sears, who previously managed production projects at Shell.

BP said it has bolstered safety operations globally since the spill, introducing a safety and operational risk staff with 800 positions and an internal global wells organization to standardize drilling practices, among other measures. The company says it cannot precisely estimate new spending on safety since the spill because its efforts are integrated into many parts of the company.

In a glassed-in drilling shack on the Thunder Horse platform, operators stay connected to a new onshore command center in Houston that BP designed to monitor data from offshore wells.

On the deck below sits a blowout preventer, a room-sized piece of equipment that would soon be fitted on the wellhead of a drilling site, two miles under water.

But first it would need a safety inspection – unlike the blowout preventer that infamously failed to contain the 2010 spill, which federal regulators have said had not been inspected in years.