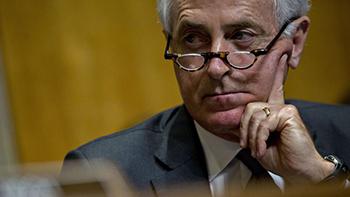 By Terrence Dopp and Anthony Capaccio

Senator Bob Corker listens during a hearing in Washington on Jan. 18, 2017.

The Republican chairman of the Senate Foreign Relations Committee said he’ll block U.S. arms sales to Saudi Arabia, Qatar and their neighbors in the Gulf Cooperation Council to prod them toward ending a standoff among critical American allies in the region.

“Before we provide any further clearances during the informal review period on sales of lethal military equipment to the GCC states, we need a better understanding of the path to resolve the current dispute, ” Senator Bob Corker of Tennessee said Monday in a letter to Secretary of State Rex Tillerson.

Corker’s threat to block weapons deals may add clout to Tillerson’s efforts to coax the feuding parties toward an agreement. A Saudi-led alliance severed diplomatic and transport links with Qatar three weeks ago, accusing their fellow Gulf Cooperation Council member of supporting terrorism and cozying up to Iran. Qatar has denied those assertions and countered that the moves are a play by the Saudis to dominate its neighbors.

“A productive next step would be for each of the countries to sit together and continue this conversation,” Tillerson said Sunday in an emailed statement. “We believe our allies and partners are stronger when they are working together towards one goal, which we all agree is stopping terrorism and countering extremism. A lowering of rhetoric would also help ease the tension.”

Tillerson also said Qatar will find it “very difficult” to comply with some demands made by the Saudi-led bloc, though he said they can be a basis for talks.

After Tillerson called on the bloc to spell out exactly what Qatar must do to end its diplomatic and economic isolation, the Saudis responded with 13 demands. They included shutting the Al-Jazeera TV network, cutting back diplomatic ties with Iran and ending Turkey’s military presence in the country — a list Qatar said was far from the “reasonable and actionable” proposals Tillerson had called for.

While Tillerson, a former oilman who negotiated major deals in the region, has sought to calm the situation and work with all parties to the dispute, President Donald Trump has repeatedly sided with the Saudis. Trump wrote on Twitter that Qatar has a history of “funding Radical Ideology,” and he has said the Saudis were right to act.

Get the latest on global politics in your inbox, every day.

The crisis is adding uncertainty to a region fraught with instability and sectarian violence, and also comes as the Gulf Arab monarchies are trying to attract foreign investment to reduce their economies’ dependency on oil exports. Iran and Turkey have backed Qatar in the crisis, with Turkish President Recep Tayyip Erdogan calling the demands an attack on the gas-rich nation’s sovereignty and against international law.

Trump boasted of offering $110 billion in arms sales to Saudi Arabia during his trip to Riyadh in May. The Senate voted this month to kill a measure that would have blocked certain sales to the Saudis, but the tally of 47-53 reflected significant opposition to the sales.

Corker’s hold on approving deals would apply to future arms sales that are subject to congressional review but haven’t yet been formally proposed, according to an aide to the senator who asked not to be identified discussing his plans. That could affect parts of the promised Saudi arms package.

It wouldn’t affect completed deals, including a $12 billion agreement to sell Qatar as many as 36 F-15 jets that was made final this month amid the Gulf crisis.

The Saudi alliance’s cutting off of diplomatic and transport links with Qatar has split families, disrupted trade, and threatens to alter long-standing geopolitical alliances. Qatar, which hosts the base for U.S. air operations against Islamic State, views the action as an illegal siege.

The blockade of Qatar is “unacceptable” and Tehran’s policy is to strengthen ties with Doha, Iran’s state-run Islamic Republic News Agency cited President Hassan Rouhani as saying on Sunday. The comments were made in a call with the Qatari emir, according to the report.

Anwar Gargash, the United Arab Emirates’ foreign minister, said on Saturday that Qatar “cannot be a Trojan horse” with regard to regional security. The country’s isolation is about “behavioral change” rather than regime change, he said at a press conference in Dubai.

If diplomacy doesn’t work “and Qatar is not ready to acknowledge and address its support for extremism and terrorism, we will have to come and say ‘you go your way,’” Gargash said.

Qatar, which had 10 days to respond to the demands, is still gauging how to answer. Sheikh Saif Al Thani, director of Qatar’s government communications office, said the list falls short of Tillerson’s test for “reasonable and actionable” requests and were instead an effort to limit the country’s sovereignty.