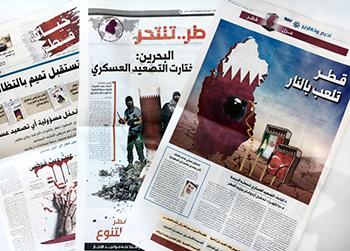 Bahrain accused Qatar of a “military escalation” of the crisis that has embroiled the Gulf region for the past three weeks, and warned there would be consequences.

While he didn’t identify Turkey by name, Foreign Minister Khalid Bin Ahmed Al Khalifa was apparently referring to the Turkish government’s decision earlier this month to accelerate legislation on the planned deployment of thousands of troops in Qatar.

The disagreement with Qatar “is a political and security dispute and has never been military,” Al Khalifa said in a June 26 post on Twitter. “But the deployment of foreign armies and their armored vehicles is a military escalation for which Qatar will bear responsibility.”

Qatar’s foreign ministry spokesman didn’t immediately respond to an email and text message request for comment during a public holiday.

Bahrain, Saudi Arabia, the United Arab Emirates and Egypt severed air, sea and land links with Qatar earlier this month, saying it was isolating it over its ties with Iran and Islamist groups. Shortly after, the Turkish government fast-tracked a bill making a technical amendment to the April 2016 agreement on stationing Turkish troops in Qatar.

Turkey, which has sided with Qatar in its showdown with the coalition, denied any relation between the Gulf crisis and its own activities to set up a military base in Qatar.

“The purpose of the deployment of the Turkish Armed Forces in Qatar is to contribute to the security of the region as well as to provide Qatar with support in military training,” the Turkish Ministry of Foreign Affairs said in a June 25 statement. “Our activities are not against any particular country.”

On Friday, the coalition handed Qatar a list of 13 demands to end the standoff. They include shutting down the state-sponsored Al-Jazeera TV network, whose coverage at times has outraged most Middle East nations; cutting back diplomatic ties with Iran; severing relations with the Muslim Brotherhood; and ending Turkey’s military presence in Qatar.

Qatar was given 10 days to respond. In response to the demands, government spokesman Saif Al Thani said the list “confirms what Qatar has said from the beginning — the illegal blockade has nothing do with combating terrorism, it is about limiting Qatar’s sovereignty, and outsourcing our foreign policy.” An official response to the demands would be forthcoming, he added.

Local papers in the United Arab Emirates, including AlKhaleej, Al Bayan and Al Ittihad, led with the Bahraini foreign minister’s remarks in full-page anti-Qatar spreads. “Qatar plays with fire,” AlKhaleej wrote across a graphic of the country’s map. Alongside was an image of a bomb next to matchboxes bearing the Iranian and Turkish flags.