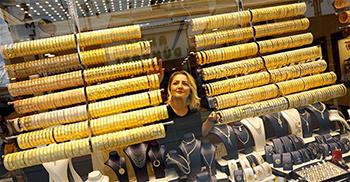 The Treasury has completed technical works to issue “gold bonds and gold-based lease certificates” by the end of the year, in an attempt to lure tons of “under-the-pillow” gold back into the economy, Deputy Prime Minister Mehmet Şimşek has said.

The Treasury has long been working on several projects in a bid to diversify Turkey’s financial markets, Şimşek said, state-run Anadolu Agency reported on June 27.

“We have completed technical works for the issuance of new financial instruments that will enable us to attract many tons of under-the-mattress gold into the economy. The legal framework is about to be finalized. We will offer these instruments to the market over this year,” he added.

Perhaps better than anywhere else, Turkey illustrates the broad role that gold can play in modern society as a popular means of investment and saving, and in Turkish culture it is also very common to gift brides with gold bangles on her wedding day.

At an average of 181 tons per annum over the past 10 years, Turkey was the world’s fourth largest consumer of gold, accounting for around 6 percent of global consumer demand, according to a 2015 report by the World Gold Council (WGC). The WGC estimated that Turkish households have accumulated at least 3,500 tons of gold “under-the-pillow,” worth over $140 billion. According to Turkish experts, this volume may hit 5,000 tons by 2017.

Şimşek said gold bonds, which are popular in South Africa and India, were redesigned in order to meet the needs of Turkish consumers.

He added that Turkish gold investors can make additional yields by buying gold bonds or gold-based lease certificates, which will be issued by the Treasury, rather than keeping their gold under the mattress.

“Both our citizens and our economy will benefit through these instruments, which will be a safe haven for investors. We want to liquidate the under-the-pillow gold for the use of the economy and to reduce the financial source needs of the system,” Şimşek said.

He also noted that the new financial instruments would be sold at Ziraat Bank branches in the initial stage.