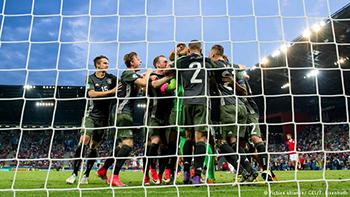 Germany have reached the Under-21 European Championship final, beating England 4-3 in a shootout after new Hamburg goalkeeper Julian Pollersbeck saved the crucial spot-kick. Germany will face Spain in Friday’s final.

Julian Pollersbeck saved the crucial penalty from Nathan Redmond as Germany beat England on penalties to reach the final of the Under-21 European Championship.

It was an absorbing, helter-skelter game that, for all it lacked in quality, more than made up for in entertainment, with the pendulum swinging one way and the other.

Germany have only once got beyond the semifinals of this competition. In 2009 a team that included Manuel Neuer, Jerome Boateng, Mats Hummels, Sami Khedira and Mesut Özil were crowned champions when they crushed England 4-0 in the final in Malmo.

While the scoreline was not so emphatic this time around, the inevitable conclusion of a Germany victory over England – on penalties no less – is a script that seems to write itself time and time again.

Germany started the brighter and, even though Gideon Jung almost gave away an early penalty when he came together with Will Hughes in the box, Jung just managed to get a foot on the ball.

Germany kept England at bay and started to exert their authority, creating a couple of chances. Jeremy Toljan, the Hoffenheim rightback, was a thorn in England’s side throughout and Davie Selke went close too.

Germany eventually took a deserved lead through Selke, who got on the end of Toljan’s cross and powered his header beyond Jordan Pickford, the most expensive goalkeeper in British history after his recent 28 million euro move to Everton.

Just as Germany thought they would be taking a deserved 1-0 lead into the halftime break, England leveled out of nothing. Germany made a mess of clearing a corner and Demarai Gray, the Leicester striker who has impressed in the tournament, stuck the loose ball into the net.

England then went ahead early in the second half after an error by Serge Gnabry. His lazy clearance went straight to Hughes, who rolled it across the face of the Germany goal, and Tammy Abraham turned the ball in from close range.

Having been on top for most of the game, Germany could hardly believe they were behind. Steffan Kuntz’s side also suffered a blow when Selke was forced off with an ankle injury. But Selke’s replacement, Felix Platte, proved Germany’s savior, heading in from a corner to make it 2-2.

Extra time was a cagey affair as neither side wanted to give the other a look-in, but Nadiem Amiri could and should have won it avoided penalties altogether when the impressive Toljan crossed from the right but Amiri, who just needed to tap in, somehow failed to make contact.

As is so often the case between these two teams, the game went to penalties – and a familiar conclusion was reached. Gerhardt missed in the shootout, but his miss was cancelled out before Pollersbeck, the impressive goalkeeper who has just joined Hamburg from Kaiserslautern, saved Redmond’s pressure kick, ensuring the outcome that we’ve seen so many times throughout the years.

Germany were the better team throughout and Stefan Kuntz’s side will rue a lack of cutting edge in front of goal, but their victory was deserved as they book their place in the final.

Many predicted a tight, tactical affair and so that proved in the first half, with few chances for either side. But Spain were able to make the breakthrough early in the second half, when Niguez finished into the bottom corner.

But Niguez put Spain back in front with a superb strike from distance, drilling a fine shot beyond Gianluigi Donnarumma from 25 meters.

Niguez put the icing on the cake for Spain with his third of the game and fifth of the tournament, setting up a mouthwatering final against Germany on Friday.