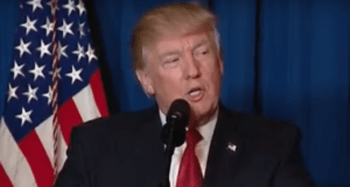 US President Donald Trump was at his desk in the Oval Office and on the phone with the new prime minister of Ireland on Tuesday when a journalist for an Irish news organisation caught his eye.

“Well, we have a lot of your Irish press watching us,” Trump said to the prime minister, Leo Varadkar, as several reporters looked on.

Then, interrupting his conversation with Varadkar, Trump pointed at the journalist, Caitriona Perry, and gestured for her to come to him.

After she introduced herself, Trump told Varadkar, “She has a nice smile on her face so I bet she treats you well.”

The exchange, which was captured on video and widely shared on social media, drew criticism about how Trump treats women and the message it sent about the attitude toward women as professionals in their fields.

Elisa Lees Muñoz, executive director of the International Women’s Media Foundation, said on Wednesday that she had heard about the episode in passing.

After a transcript of the exchange was read to her over the phone, she said: “Oh, Lord. I wish I could say this is a surprise.”

She said such occurrences were not limited to Trump, adding that female journalists are frequently called out for their appearance, their hair and the way they dress.

Comments like the president’s detract from a woman’s value as a professional, she said.

Kris Macomber, an assistant professor of sociology at Meredith College in Raleigh, North Carolina, said in an email that Trump’s comments reflect “textbook paternalistic sexism”, which is often couched in a “‘playful’ tone, as if she should feel flattered.”

“Donald Trump’s track record for sexist remarks is well documented, and this particular case fits right in line with his previous remarks,” she wrote. “He didn’t say those things for Perry’s sake; rather he said those things to show all the people in the room (and the cameras) that he’s the kind of man who flirts with women he considers attractive.”

Most notably, a month before the election, a 2005 recording surfaced of Trump talking to television personality Billy Bush of Access Hollywood and speaking in extraordinarily vulgar terms about women.

In 2013, President Barack Obama apologised to Kamala Harris, who was then the attorney general of California and is now one of its senators, after telling a group of wealthy donors that she was “the best-looking attorney general in the country”. The comment drew accusations of sexism, which the White House at the time quickly sought to quiet.

Perry, the Washington correspondent for Raidió Teilifís Éireann, could not be reached to comment on Wednesday. On Twitter, she posted a video of the exchange and described it as a “bizarre moment”.

RTÉ had an article on its webpage under the entertainment category with the headline: “Trump call! RTÉ’s Caitriona has Presidential moment.”

Perry told RTÉ she expected to shoot footage from outside the window of the White House during the president’s call but that reporters were invited inside.

“One minute we were outside the window and the next minute I’m meeting the president of the United States,” she said. “When we went in he was already on the phone but I must have caught his eye and he called me over.”

The White House did not respond to an email requesting comment.

Deb Curry wrote: “Please, don’t judge us by this man. My husband would never treat you like this in a workplace. So inappropriate.”

Others defended the president and said he was complimenting Perry.

Twitter user Mike Boyd wrote: “Our generation calls what POTUS did a simple act of dignity and kindness. When kindness is mistaken for being bizarre, it’s a sad commentary.”