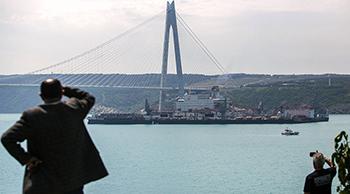 Russian gas monopoly Gazprom is expected to leave the Turkish market and will concentrate on gas sales to Turkey, reports business daily Kommersant.

Gazprombank is completing the withdrawal from Promak, a company which owns a 60 percent stake in the two importers of Russian gas to Turkey – Enerco and Avrasya, the newspaper writes.

According to Medvedev, the Turkish market is “unpredictable” and loses appeal due to the weakening of the lira and regulated tariffs. Kommersant’s sources in the industry said Bosphorus lost about €100 million in 2016.

Gazprom owns 71 percent of Bosphorus Gaz. The company will sell its share to the local Sen Group, which owns the remaining 29 percent, the newspaper says.

Leaving the market may strengthen Gazprom’s negotiating position in export prices, as the company will no longer have a direct interest in maintaining the profitability of the sales business within Turkey, experts say. Gazprom has been suing Turkish state corporation Botas and private companies in a price dispute.

However, no final decision to leave the market has been made, the newspaper added.

The project, with an estimated cost of €11.4 billion ($12.7 billion) was announced in December 2014. However, it was put on hold after the downing of a Russian plane in Syria by a Turkish jet in November 2015.

The pipeline could extend from Turkey to Europe, but Russia needs solid guarantees from Brussels the project will not be scrapped like the South Stream pipeline project, said Foreign Minister Sergey Lavrov last October.