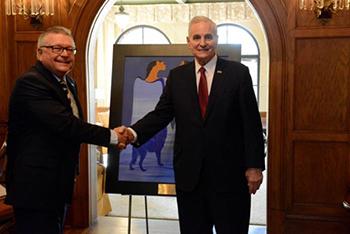 In the baking Ohio heat Canada’s trade minister is trying to save NAFTA, one encounter at a time.

Francois-Philippe Champagne is in Cincinnati for a meeting-packed June day as part of a concerted Canadian outreach campaign ahead of talks to renegotiate the North American Free Trade Agreement.

U.S. President Donald Trump describes the 1994 pact as a disaster and has threatened to walk away from it.

Concerned that any moves to abandon NAFTA or curb trade could cost thousands of jobs, the Liberal government of Prime Minister Justin Trudeau wants to remind Americans how important bilateral trade is while seeking allies to press the Canadian cause if threats emerge.

Mexico, the pact’s third partner, has been leading a similar campaign.[STORY LINK]

Champagne’s message is simple: “We are your largest client.”

Every day some 400,000 people and C$2.4 billion ($1.82 billion) worth of trade cross the border. Crimping that flow will hurt both nations, says Ottawa.

In all of Ohio, more than 300,000 jobs depend on trade with Canada, Champagne notes. To help drive home the point, Canadian officials drill deep into the data.

For example, their analysis shows that in Ohio’s first congressional district, 17,269 jobs depended on Canada-U.S. trade and investment, with exports exceeding $1 billion.

Champagne, who flew in late the night before, starts his day at Cincinnati’s members-only Queen City Club, where he hosts a breakfast with a dozen local leaders.

“Sometimes as friends and neighbors we take each other for granted,” he tells the group. “Let’s make sure we don’t put things in place that would disrupt supply chains.”

Reuters was granted exclusive access to the meetings during Champagne’s trip.

Lawyer Daniel Ujczo, who specializes in Canada-U.S. affairs, tells Champagne his clients’ biggest complaint is red tape that makes it hard to transfer specialists across the border.

“I don’t think companies will see a NAFTA win unless we address this,” he adds.

Shortly afterwards Champagne tells a business forum of around 150 people that the greater Cincinnati area sends 20 percent of its exports to Canada.

Diplomats hand out leaflets underlining the closeness of trade ties. In the car heading for his next appointment, Champagne reflects on the audience and tells aides: “They don’t know many of the numbers.”

That feeling is only underlined at a lunch with local politicians. William Seitz, a Republican member of Ohio’s House of Representatives, admits afterwards his constituents know little about free trade.

“Folks don’t understand as well as they should that when we erect barriers to trade with foreign countries, we are increasing prices for domestic consumers,” he says.

Champagne is willing to use any hook to make a connection. He studied in Cleveland and in every meeting notes a local politician once called him “a son of Ohio”.

Later in the day he presents an honorary certificate to Joey Votto, the Canadian star of the Cincinnati Reds baseball team.

As his car speeds from the Reds stadium to another appointment in the late afternoon, he says: “It’s been a great day … We’ve made a small difference.”

Officials track the number of trips and how many people they meet, but say ultimately what counts is whether their new-found allies will step up to defend trade with Canada.

When Trump announced in April he might tear up NAFTA, “you had many Republican senators calling the White House and calling Trump to say ‘This is crazy’,” said another person involved in the campaign.

Some of the callers had already been approached by Canada as part of the effort to contact influence-makers, that person said.

The outreach effort is not intended to convey a threat, says David MacNaughton, Canada’s ambassador to Washington.

But he adds: “It doesn’t take a rocket scientist to figure out that at some point, if they keep doing things that harm Canadian companies, that it’s going to be difficult for us to resist doing the same.”

Canada initially chose to focus on 11 states, selected for their economic and political importance.

These include Indiana, home of Vice President Mike Pence. The Canadians are “talking to people who talk to Pence”, one official tells Champagne.

A few days after the trip, Public Safety Minister Ralph Goodale is in Minneapolis, Minnesota, at an exclusive reception to build awareness of bilateral ties.

“When the relationship is without any great problems, people tend to go to sleep on both sides,” he tells Reuters.

Asked about the Canadian message, O’Rourke says most companies want freer or fairer trade. Pressed as to whether they will stand up for Canada, he replies: “They will of course stand up for what is in their best interest.”

Goodale acknowledges the outreach does not guarantee success, but adds: “our trade will do better, and our relationship will do better, the more vigorous and outgoing we are”.

Foreign Minister Chrystia Freeland quipped last month that “if you’re an American official or legislator, it’s been hard to avoid a Canadian”, but Goodale is not worried Canada might be wearing out its welcome.

“They are so big I think it will be a long time before we have overdone it,” he says.