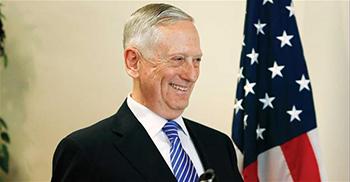 U.S. President Donald Trump’s warning to the Syrian government not to carry out a chemical weapons attack appears to have worked, Pentagon chief Jim Mattis said on June 28.

“It appears that they took the warning seriously,” Mattis said, referring to the regime of Syrian President Bashar al-Assad.

The warning came after U.S. intelligence noticed suspect activity at the airbase used to launch a suspected chemical strike two months ago. “I think the president speaking about [these preparations] says how seriously we took them. He wanted to dissuade them,” Mattis told reporters as he flew into Brussels for a NATO defence ministers meeting.

The April 4 attack on the rebel-held town of Khan Sheikhun was reported to have killed at least 87 people, including many children, and images of the dead and of suffering victims provoked global outrage.

Washington launched a retaliatory cruise missile strike days later against the Shayrat airbase – the first direct U.S action against the regime, which denies any use of chemical weapons.

When asked how he knew Trump’s warning had worked, Mattis said: “They didn’t do it,” a reference to the fact no chemical strike had occurred since June 26.

At the same time, he cautioned that “Assad’s chemical program goes far beyond one airfield.”