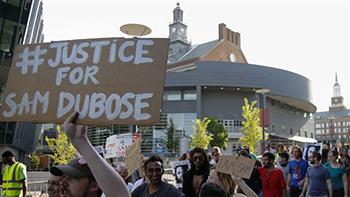 Angry protesters in the US state of Ohio have called on authorities to try for the third time a white police officer who shot dead an unarmed black man in 2015.

Dozens of activists gathered at the University of Cincinnati on Wednesday night to demand justice for Sam DuBose, a black motorist who was killed by Ray Tensing, a former cop who worked at the university.

Tensing killed DuBose during a traffic stop over a missing front license plate. The former cop claims he used his gun in self defense because he was being dragged by Dubose’s vehicle

So far, two murder and voluntary manslaughter trials against the former cop have ended up in mistrials. In both cases, the juries failed to reach a verdict after hours-long deliberations.

Hamilton County’s prosecutor says that the final decision on a retrial will be taken by the week of July 10.

Following the second mistrial on Friday Audrey DuBose, mother of the victim, said the family was “outraged” and wanted the Cincinnati community to join them in “peaceful protest” of what she called an “unjust result.”

Cincinnati’s elected officials and religious leaders also expressed disappointment about the case. Cincinnati Mayor John Cranley said Friday he does not believe DuBose should have been killed in that situation.

DuBose’s killing was one in a series of high-profile, police-involved killings that sparked nationwide protests over police brutality. Tensing was fired from his job and arrested after the shooting. He remains free on bail.

Family and friends of Sam DuBose arrive at the courthouse for the trial of the white officer who killed him. (Getty Images)

Tensing was the third US law enforcement officer to be tried for shooting a black man over the past few days. None of the officers were convicted.

Leaders of the Black Lives Matter movement in Cincinnati have called Tensing’s mistrial “blatant injustice” and a “textbook example” of institutionalized racism in the US.