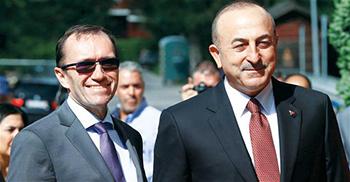 Turkey has urged a “fair and lasting” solution at the new round of Cyprus talks, an official familiar with the matter has told the Hürriyet Daily News, as the Greek Cypriot and Turkish Cypriot leaders began key talks on June 28 aimed at reunifying the Mediterranean island.

“We came here for a solution. This problem, which has been continuing for 50 years, should now be resolved,” Foreign Minister Mevlüt Çavuşoğlu said at the closed meeting, according to the official.

Turkish Cypriot and Greek Cypriot leaders, along with the representatives of guarantor countries, started talks aimed at reunifying the country’s 43-year-long dispute at the U.N.-sponsored discussions in the Swiss Alps.

“In the first session, we presented an approach to solve the Cyprus issue in a holistic approach within a historical perspective,” the official said.

The island was divided along ethnic lines in 1974 when Turkish troops intervened after supporters of union with Greece led a failed coup. The talks involve the guarantors – Greece, Turkey and Britain – but British Foreign Secretary Boris Johnson and State Minister Alan Duncan left by helicopter before the talks had officially opened to head home for a parliamentary session.

Eide has presided over peace efforts since 2014, and the last round of talks in January ended with a number of issues – namely security, property and power sharing – unresolved.

“We had a good beginning, actually beyond what we expected,” Eide told reporters after the opening session. “Hard work will remain… We will do what is possible to facilitate, but at the end of the day of course it’s the responsibility of the conference participants to go that final mile,” he added.

“The atmosphere was positive… There was a remarkably positive attitude,” Jeffrey Feltman, the U.N. under-secretary-general for political affairs, told reporters in the Swiss Alpine resort.

In the highest level meeting for six months, discussions started on issues such as territory and governance and each side put forward its position on security and the future role of guarantor countries.

Two issues are vexing: Turkish Cypriot demands for a rotating presidency, and Greek Cypriot demands that Turkey pulls all its 30,000 troops off the island, and renounces its intervention rights.

About a dozen Greek Cypriot and Turkish Cypriot activists from the peace group #UniteCyprusNow waved flags and held placards reading “peace” and “unite Cyprus now” outside the hall where the peace talks are taking place.

At the beginning of the meeting, Kotzias told Çavuşoğlu: “Mevlüt, it will be 43 degrees in Greece tomorrow,” to which Çavuşoğlu replied: “You must be here [at the table] without ever going anywhere,” while the reporters were in the room.