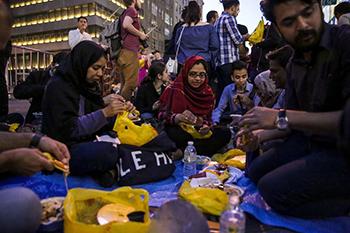 By Nick Wadhams and Nafeesa Syeed

The Trump administration will put its new travel restrictions on refugees and migrants from six countries into effect at 8 p.m. eastern time on Thursday, according to a person familiar with the matter.

The rollout of the executive order, which follows a U.S. Supreme Court decision Monday allowing parts of the order to proceed, is being led by the State Department. The timing is aimed at giving embassies and consulates worldwide sufficient direction on how to carry out the order before it goes into effect, according to the person, who asked not to be identified because the move hasn’t been formally announced.

The policy is an attempt to flesh out a June 26 Supreme Court decision reviving President Donald Trump’s 90-day travel ban on people entering the U.S. from six predominantly Muslim countries: Iran, Libya, Somalia, Sudan, Syria and Yemen. Existing visas will be respected, but new applicants from the six countries must prove a relationship with a parent, spouse, child, sibling or close in-law already in the U.S., the Associated Press reported, citing a diplomatic cable.

Travelers with business or professional ties from the countries must also show a relationship that is “formal, documented,” and not based on an intent to evade the ban, the AP said. Some exemptions, including for students and journalists, are included in the policy, the news service reported.

After months of delays to Trump’s initial travel ban and a revised version, which were held up by the courts, the Supreme Court’s 13-page ruling allowed the government to deny entry to people from the six nations who don’t have existing ties to the U.S. But determining who has “bona fide” U.S. connections — the court’s phrase — has tied up officials from the Department of Homeland Security, the State Department and the Justice Department since the ruling was issued.

The ban drew public protests and criticism from advocacy groups, former officials who work on refugee issues, and nongovernmental organizations that relocate them to the U.S. They contend that the majority of refugees coming to the U.S. already have family ties and that the existing process of clearing them to live in the U.S. is extremely rigorous.

The Trump administration has countered that refugees may pose a security risk. Cabinet members such as Secretary of State Rex Tillerson, meanwhile, have said the U.S. wants to keep refugees that have fled to places such as Jordan and Turkey within their regions so they can return home when it’s safe to do so. They are also asking other countries to take more of the burden.

“Our message is we’re leaning in and asking all of you, all of you to step up and do more,” Tillerson testified at a Senate hearing earlier this month.

Implementing the ban requires providing clear guidance for thousands of customs and consular officials, as well as airlines and other travel companies around the world seeking to avoid the confusion and chaos generated by Trump’s initial attempt to enforce his policy in January.

“There will be some amount of iterative process,” said Brian Egan, a legal adviser in President Barack Obama’s State Department. “The guidance is going to take a little while to generate, even if the policy were crystal clear. You’ve got to draft it and get it through the lawyers at State, you’ve got to make sure the White House is comfortable with it, and the Department of Justice and DHS, too.”