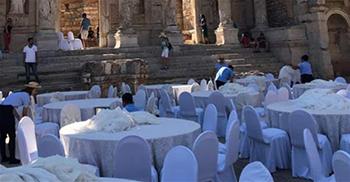 Culture Minister Nabi Avcı on June 28 refuted recent reports that wedding and circumcision ceremonies have been held in the ancient city of Ephesus in Turkey’s western province of İzmir.

However, he also said Ephesus was hosting a number of cultural and touristic events other than such ceremonies.

“The method in Ephesus is such that it will not damage the fabric of such a historic archaeological site. Can cultural and touristic events be held? Yes, our regulations allow that. But that does not mean weddings, engagements or circumcision ceremonies can be held there,” Avcı told reporters after an event at Istanbul’s Topkapı Palace.

He also noted that all events at Ephesus, including concerts, had to get consent from the Culture Ministry.

Earlier, images of decorated tables and chairs in front of the Library of Celsus at Ephesus, a UNESCO World Heritage Site, had drawn ire from the public. Reports had claimed that the site had been used for wedding and circumcision ceremonies.

In a separate statement, the ministry had said the images circulated in the media showed a meal organized for the visitors from a cruise ship, denying that weddings or circumcision ceremonies were held at Ephesus.