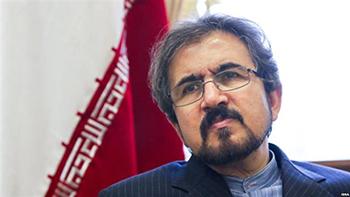 Iran has rejected groundless US claims against the country in its annual report on global human smuggling, saying such crimes are in fact rooted in Washington’s warmongering and “interventionist” policies in different parts of the world.

“The root cause of human trafficking should be seen in the unilateral, interventionist and aggressive policies as well as occupation, wars of attrition, terrorism and genocide, in a majority of which the military and security forces of the US and some of its allies have a hand,” said on Thursday.

The report, published by the US State Department on June 27, described Iran as a source, transit site and destination for men, women and children subjected to human trafficking.

It lists China, Russia, Syria and Iran as among the worst offenders for human trafficking.

Qassemi severely condemned the “baseless allegations” against Iran and stressed that the US “lacks the required competence and legitimacy” to draw up such reports against other countries.

Such reports are “one-sided, biased, political and based on double standards”, and are aimed at tarnishing the image of the Islamic Republic, he said.

The allegations come despite the fact that Iran’s Constitution has one of the most progressive laws with regard to human dignity based on Islamic teachings and that the country’s parliament has passed a law on fighting human trafficking in all its forms.

Qassemi underlined the need to identify and punish the elements behind human trafficking across the world.

“The responsibility of the US government is evident. That government should not and cannot abdicate its responsibility by diverting attentions from this important issue and leveling wrong and baseless allegations against other countries.”