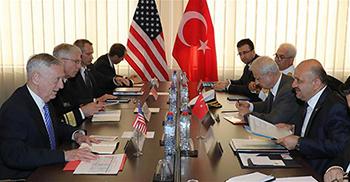 Mattis had stirred Turkish anger by saying the U.S. may need to supply the YPG with weapons and equipment even after the capture of Raqqa from the Islamic State of Iraq and the Levant (ISIL).

Turkey, which views the YPG as an offshoot of the outlawed Kurdistan Workers’ Party (PKK), earlier said that Mattis had assured it in a letter that the U.S. would eventually take back the weapons it was giving to it once ISIL was defeated.

“We’ll do what we can,” the U.S. defense secretary told reporters on June 27 during his flight to Germany, when asked about the weapons recovery.

The YPG issue was expected to dominate the Turkish and the U.S. ministers’ meeting, as Ankara wants to set up a “joint mechanism” with the U.S. to take back arms sent to the Syrian Democratic Forces (SDF) after the anti-ISIL mission.

Speaking in a televised interview on June 23, Işık said he would discuss the issue with Mattis in Brussels. He also vowed to address the number of arms delivered to the SDF, as the figures given by the U.S. to Turkey and the ones reported in the press are different.

Meanwhile, the defense spending of the NATO allies was set to be one of the other major issues to be handled at the summit.

“In 2017 we foresee an even greater annual real increase of 4.3 percent. That is three consecutive years of accelerating defense spending,” Stoltenberg told reporters on the eve of a defense ministers’ meeting in Brussels.

“So we are really shifting gears, the trend is up and we intend to keep it up,” he added.

Trump has repeatedly berated the allies for not doing more to share the defense burden and bluntly told them again at a leaders’ summit in Brussels last month that they could not count on Washington coming to their defense if they did not do their bit.

Trump’s comments caused consternation among many, notably Germany, but Stoltenberg said the president’s demands were “understandable” given the challenges the U.S.-led alliance now faces.

“I welcome the strong focus of Trump on spending and defense burden sharing. At the same time, I also underline that allies should invest more in defense not just to please the United States but because it is in their own interest and they have made the commitment,” he said.

Stoltenberg, a former Norwegian prime minister, recalled that the 28 allies had pledged at a 2014 summit in Wales to increase defense spending to the equivalent of two percent of annual economic output within a decade.

That move, pushed by then president Barack Obama in response to the Ukraine crisis and a more aggressive Russia, had halted and reversed years of defense cuts, Stoltenberg said.

So far only five allies have met that benchmark — the U.S., Greece, Britain, Estonia and Poland. But Stoltenberg said Romania was set to join them this year, and Latvia and Lithuania in 2018.

In 2015, the allies turned the corner with an increase of 1.8 percent overall, pushed that to 3.3 percent in 2016 and now looked to go further again this year, he said.

In all, the three years represented an overall increase of $46 billion dollars, boosting NATO’s ability to face the Russian challenge in Europe and new threats such as Islamic State-inspired jihadi terrorism across the Middle East and North Africa.

The United States accounts for about 70 percent of combined NATO defense spending and Washington has pushed the allies for years to do more to ease the burden.

Trump, however, has pressed hardest of all, putting the allies on the back foot by dubbing NATO “obsolete” and questioning the wisdom of the U.S. security commitment if they failed to live up to their side of the bargain.