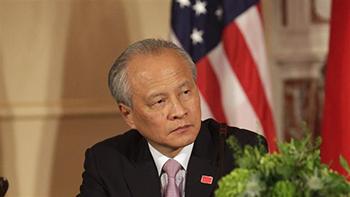 China has protested to the United States for approving the sales of weapons to Taiwan, saying the potential sales would break trust between Beijing and Washington.

China’s ambassador to Washington, Cui Tiankai, said on Thursday that arms sales to Taiwan would betray Chinese President Xi Jinping’s trust in US President Donald Trump, built when the latter invited Xi and his wife to the US in April.

This photo, taken on April 07, 2017 shows US President Donald Trump (R) and Chinese President Xi Jinping shaking hands during a dinner at the Mar-a-Lago estate in West Palm Beach, Florida. (By AFP)

During their meeting at Trump’s private residence in Florida, the US president promised President Xi to make efforts to build “a very, very great relationship” between the two countries.

“Arms sales to Taiwan will certainly undermine the mutual confidence between the two sides and runs counter to the spirit of the Mar-a-Lago summit,” Ambassador Cui told reporters in Washington DC, referring to the meeting at Trump’s private estate.

US State Department spokesperson Heather Nauert said on Thursday that the planned US weapons sales to Taiwan were valued at “about $1.42 billion.”

The arms deal includes advanced missiles and torpedoes, in addition to technical support for an early warning radar system.

Beijing considers self-ruled Taiwan part of its territory, and expects other countries to adhere to the policy of “One China,” which recognizes Chinese sovereignty over Taiwan.

The US, long practicing that policy, briefly upset Chinese rulers when Trump took a congratulatory telephone call from Taiwan’s leader later last year, breaking with diplomatic protocol. Although he later backed his decision to take the call, and further questioned the “One China” policy, Trump ultimately acknowledged Chinese sovereignty over Taiwan, and seemed to have regained Beijing’s confidence with reassurances that Washington would be committed to the policy. And later came the private meeting at Mar-a-Lago.

The US has had military ties with Taiwan even before President Trump took office and despite the recognition since 1979 of Chinese sovereignty over the self-ruled island.

The latest announcement of the weapons sales to Taiwan came on the same day as the US Treasury Department announced a decision to slap a series of economic sanctions on Chinese companies for allegedly giving financial support to North Korea for its weapons programs.

Pyongyang is under international pressure to abandon its nuclear and missile programs. North Korea says it needs them to defend itself against America’s decades-long policies of aggression and expansionism in the region.

China is North Korea’s main ally. South Korea is the North’s chief regional adversary, and thousands of US forces are stationed in South Korea.