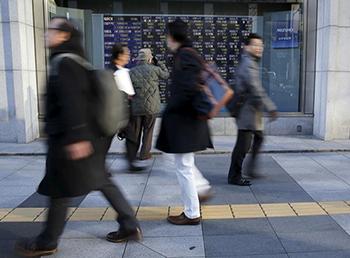 The dollar extended its losses on Friday as major central banks signalled that the era of cheap money was coming to an end in a boon to sterling, the euro and the Canadian dollar, while Asian shares were hit by dismal performances of European and U.S. markets.

“International markets continued to adjust for a 2018 outlook where other central banks join the Fed in gradually reducing monetary stimulus,” Ric Spooner, chief market analyst at CMC Markets in Sydney, wrote in a note.

The Korean won weakened against the dollar after the country reported industrial production rose by 0.2 percent in May from a month earlier, missing expectations for growth of 1.5 percent. That followed a 2.2 percent decline in April

But the greenback remained lower against other major currencies. Adding to the dollar’s weakness against the yen was data showing Japanese core consumer prices rose 0.4 percent in May from a year earlier in its fifth straight month of gains, although inflation remains well below the central bank’s 2 percent target.

Bank of England Governor Mark Carney surprised many on Wednesday by conceding a rate hike was likely to be needed as the economy came closer to running at full capacity.

Two top policymakers at the Bank of Canada also suggested they might tighten monetary policy there as early as July.

Despite comments by sources that European Central Bank President Mario Draghi had intended to signal tolerance for a period of weaker inflation, not an imminent policy tightening, the euro on Friday revisited the one-year high of $1.1445 hit on Thursday.

The euro EUR=EBS remained close to that level and was at $1.14425 on Friday, retaining most of Thursday’s 0.6 percent gain.

In stocks, the MSCI’s broadest index of Asia-Pacific shares outside Japan .MIAPJ0000PUS fell 0.7 percent, set to end the month up 1.7 percent after hitting a two-year high on Thursday. It is up 5.3 percent for the quarter and has risen 18.3 percent this year.

The negative sentiment infected Chinese shares despite surveys showing activity in the country’s manufacturing and services sector accelerated in June from the previous month. Manufacturers appeared to enjoy strong external demand, as new orders and production rose at a solid pace.

Overnight, the tech-heavy Nasdaq .IXIC led declines on Wall Street with a 1.4 percent loss. The Nasdaq is poised to post a 0.9 percent loss for the month, but is still up 14 percent this year.

The drop in tech stocks overnight was due to a rotation into bank shares, which have lagged this year, after the biggest U.S. banks revealed buyback and dividend plans that beat analysts’ expectations after the Fed approved their capital proposals in its annual stress test program.

The S&P financials index .SPSY rose as much as 2 percent overnight, while the S&P technology index .SPLRCT fell as much as 2.7 percent.

In commodities, oil prices continued their recovery this week on a decline in weekly U.S. crude production.

U.S. crude CLc1 added 0.7 percent to $45.20 a barrel in its seventh straight session of gains, bringing its weekly increase to 5.1 percent, and narrowing its monthly and quarterly losses to 6.5 percent and 10.7 percent respectively.

Global benchmark Brent LCOc1 gained 0.8 percent to $47.77 a barrel, poised to post a 5.1 percent loss for the month and 9.6 percent for the quarter.