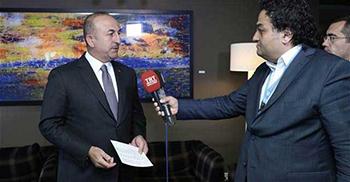 The Greek Cypriot and Greek sides are “dreaming” when they push for lifting all guarantees. Turkish Foreign Minister Mevlüt Çavuşoğlu said yesterday, when he was speaking to journalists on the sidelines of the talks in the Swiss Alpine resort of Crans-Montana.

“The Greek side and Greece expect that all guarantees will be ligted and no Turkish soldiers will be left on the island,” said Çavuşoğlu.

“This a dream. They should awake from this dream.”

“This conference on Cyprus is the final one and there should be a conclusion at this round in Crans-Montana,” he added, calling on the Greek Cypriot leadership to bring “acceptable proposals” to the table.

Greek media claims about an alleged plan to cut Turkish troop numbers in Cyprus by 80 percent were dismissed by Ankara earlier on June 29.

Çavuşoğlu told reporters Ankara could not accept having “zero troops” in Cyprus.

On the first day of the key new round of Cyprus talks aimed at reunifying the Mediterranean island, the Turkish side has stressed the vital importance of the “guarantee system” for security in a new, lasting partnership between the Turkish and Greek Cypriots, a Foreign Ministry official has told the Hürriyet Daily News.

The Turkish side presented its view on the issues of security and guarantees on the first day of talks, the official stated.

“We emphasized that the justified worries of the Turkish Cypriots, which are arising from painful experiences in the past, are essential for the security and guarantee system to be put forward in the solution,” the official said.

However, the Turkish delegation has said the conference is not just an arena in which the topics of security and guarantees are addressed, because it is necessary to know how the constitutional order will be revealed during negotiations.

For this reason, the Turkish side has said it is necessary to reach progress in other issues addressed in the ongoing talks for the success of the conference.

The Turkish Cypriot and Greek Cypriot leaders, along with the representatives of the guarantor countries, started talks aimed at reunifying the country’s 43-year-long dispute at the U.N.-sponsored discussion in the Swiss Alps on June 28.

In an interview with AFP, Feltman, who is attending the talks in the Swiss Alpine resort of Crans-Montana, said that Greek- and Turkish-Cypriot factions had made unprecedented progress on the crucial issue of security.