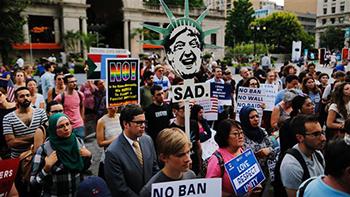 Hundreds of people have descended upon Union Square in New York City to protest against President Donald Trump’s travel ban that came into effect Thursday.

Protesters were gathering in Union Square Park at 5:30 pm to protest what they call “Trump’s Muslim Ban 3.0.”

“I believe that America is a country of liberty and of freedom, and that we should be accepting of all people,” a female protester told local media.

“The use of national security as the rationale for implementing the Muslim ban is quite comical, to say the least,” said Murad Awadeh of New York Immigration Coalition.

The US State Department has announced new criteria for visa applicants from six Muslim-majority countries.

Under the new rules, citizens of Iran, Syria, Sudan, Somalia, Libya and Yemen would be given a US visa only if they have a “close” family or business tie there.

“Donald Trump does not get to decide who is family or what is love,” New York City protest organizers said in a statement on Facebook.

“It’s up to us now to fight back against this latest attack and stand up for the values that truly make America great: opportunity and justice for all,” they added.

The new guidelines do not allow grandparents, grandchildren, uncles, aunts, cousins and fiancés to travel to the US.

“The president is supposed to protect American families, not rip them apart,” said Shayan Modarres, a lawyer with the National Iranian American Council.

The state of Hawaii has asked a federal judge for clarification regarding the Supreme Court ruling, arguing that the administration has interpreted the court’s decision too narrowly.

Trump’s first travel ban caused much confusion in January with visa holders being kept off flights or barred entry on arrival in the US.

Lower courts blocked that initial directive and, in March, the president issued a revised order intended to overcome legal hurdles.

However, the revised order was also blocked by federal judges in the states of Hawaii and Maryland and upheld by the 4th US Circuit Court of Appeals in Richmond, Virginia.

The Supreme Court on Monday narrowed the scope of lower court rulings and agreed to hear the administration’s appeal in these cases.