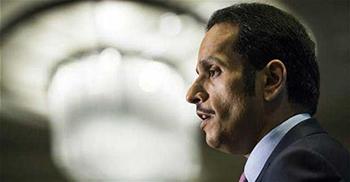 Turkey has always had a long and strong relationship with Qatar but that nexus does not mean Ankara’s ties to other Gulf nations should be undermined, al-Sani said at a panel discussion in the U.S. capital that focused on how to resolve the crisis.

“Turkey has been supporting Qatar with supply chain because of the effects of the blockade and urges the parties to engage in a dialogue,” he said.

Doha denies the accusations and has rejected a 13-point list of demands it received from the four countries to restore ties.

Al-Sani said much of the assertions about Qatar were unfounded and that his country is ready to talk with its neighbors to solve the issues.

“The crisis should end with a political solution by the participation of international actors. As long as it does not violate our independence and our national sovereignty, we are ready to sit down with our neighbors and talk about all the problems,” he said.

Al-Sani described the meeting earlier this week with Secretary of State Rex Tillerson as “very productive,” three weeks after the U.S. state department voiced confusion over the Saudi-backed embargo of the country.

He believes Tillerson is working hard to resolve the crisis and hopes those efforts will be successful.