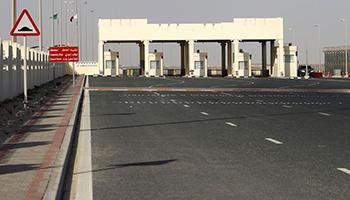 The Qatari side of the Abu Samrah border crossing with Saudi Arabia on June 23, 2017.

The Saudi Arabia-led effort to isolate Qatar is an “inhuman siege” that’s putting the future of the Gulf Cooperation Council at risk, Qatar’s foreign minister said.

Foreign Minister Mohammed Al Thani said the Gulf emirate is willing to meet with its neighbors to ease tensions but pushed back on a list of demands — including the shuttering of the Al Jazeera television network — issued by the bloc for its alleged support for terrorism. A deadline the Saudis set for the demands expires within days.

“We have stated consistently and unequivocally that Qatar is willing to sit down with our neighbors to discuss all issues pertaining to regional security and stability so long as these demands do not infringe upon our independence or our national sovereignty,” Al Thani said in a speech Thursday in Washington.

Saudi Arabia, Bahrain, the United Arab Emirates and Egypt severed air, sea and land links with Qatar this month, saying they were isolating the sheikhdom over ties to Iran and support for Islamist groups. That has led to human rights violations and thousands of families being separated, according to Al Thani.

The six-nation GCC is the last “source of stability” in the Middle East, Al Thani said. “We cannot afford another conflict in the region. The siege is a clear act of aggression.”

After U.S. Secretary of State Rex Tillerson urged the Saudi-led bloc to lay out its demands, the coalition last week presented Qatar with 13 requirements to end the standoff. On Tuesday, during a visit in Washington, Saudi Foreign Minister Adel al-Jubeir called the demands non-negotiable.

Beyond the demand on Al-Jazeera, the list includes cutting back diplomatic ties with Iran, severing relations with the Muslim Brotherhood and ending Turkey’s military presence in Qatar.

Describing the demands as non-negotiable is “not helpful,” Al Thani said, asserting they are based on “unsubstantiated claims.” The bloc’s actions represent a “serious violation of international law,” Al Thani added.

With the deadline looming, Al Thani said the only resolution is through negotiation, with the bloc submitting evidence for its grievances. Qatar will also pursue “legal action,” he said, without providing details.

Al Thani said Tillerson, whom he met on Tuesday, agreed on the urgency to pursue a political solution. He said the U.S. is playing a “very active role” in both supporting Kuwaiti efforts to mediate as well as “facilitating” between the countries in conflict.

He urged the U.S. to put pressure on the countries to engage in dialogue. Qatar hosts the regional headquarters for the U.S. Central Command, which includes a state-of-the-art air base the Pentagon depends on to target Islamic State.

Senator Bob Corker, the Republican chairman of the Senate Foreign Relations Committee, said this week that he’ll use his position to block U.S. arms sales to Saudi Arabia, Qatar and their neighbors in the Gulf to prod them toward ending the imbroglio.

In a series of tweets Thursday, Corker said the “ongoing crisis is an opportunity for us to get far more serious about pressuring the GCC” to cut off funding for terrorists.

“The truth is that all GCC countries have failed to adequately address terror financing within their borders,” Corker wrote on Twitter.

Al Thani said the senator’s efforts are “highly appreciated and it should contribute to push this process forward.”